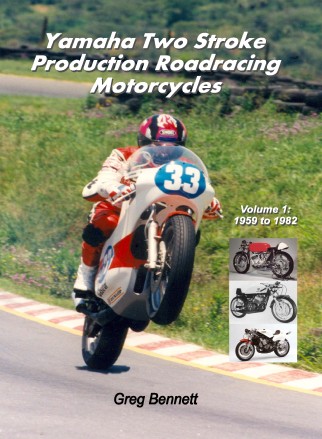 A very limited number of A5 paperback copies of the book have been re-printed. I have the last few of them available for sale at $Aus100 each plus shipping.

If you would like to grab one before they are all gone forever then email me at: Email the Webmaster

Read what Alan Cathcart had to say about the book:

609 examples of the TZ750 "Heavyweight Hurricane" which came to dominate F750 racing so completely that it caused its eventual demise, were produced by Yamaha in the model's nine years of existence up to 1983, including those surprising Sonauto Yamaha French 24-hour endurance racing versions. That's just one of the many fascinating statistics contained in the most authoritative book yet written about the bikes which changed the face of Grand Prix motorcycle racing in the Classic era, the production Yamaha two-stroke racers sold to customers around the world either in twin-cylinder 125/250/350 guise, or double-up 500/750 form. Unbeguilingly though straightforwardly entitled "Yamaha Two-Stroke Production Roadracing Motorcycles", this soft-cover large-format book (ISBN 0 9775823 0 2) has been produced in Australia by Greg Bennett, webmaster of the site dedicated to these remarkable machines at www.tz350.com in between studying for a university degree and holding time a full time job! This multi-tasking has resulted in a work that's both a hands-on history as well as an owners manual for those fortunate to possess one of the many thousands of examples of these historic racers built during the period from 1959 to 1982 covered by this first of what's intended to be two volumes. Although illustrations on this self-published book are confined to black-and-white images, it provides a complete account for enthusiasts of times past of what were arguably the most significant motorcycles of their time, at least as important an element in the history of Grand Prix racing as the iconic Manx Nortons which they were responsible for sending to the dustbin of history. Starting with the air-cooled TD1 in 1959, Yamaha roadracers dominated starting grids around the world for more than 20 years, and Bennett provides a readable and authoritative account of all the different variations, evolution, as well as a host of technical details for each model, right down to the crucial exhaust pipe dimensions for anyone restoring such a bike. You don't have to be a Yamaha anorak to enjoy reading this book, though it will help to appreciate it to the full if you own one, which is available directly from Greg Bennett at www.tz350.com .