Welcome to the internet home of the 1962 to 1982 Yamaha 2 stroke production roadracer!

“Yamaha’s Glorious Grand Prix History” is the debut offering from Englishman, Roger Gowenlock, a self-confessed 60s GP racing fanatic and one aptly nicknamed “The Sherlock Holmes of GP racing” by legendary Yamaha factory mechanic Ferry Brouwer. It is, in essence, a 255 page deep analysis of Yamaha’s involvement in GP racing in the mid to late 60s, an era many regard as the factory’s heyday. 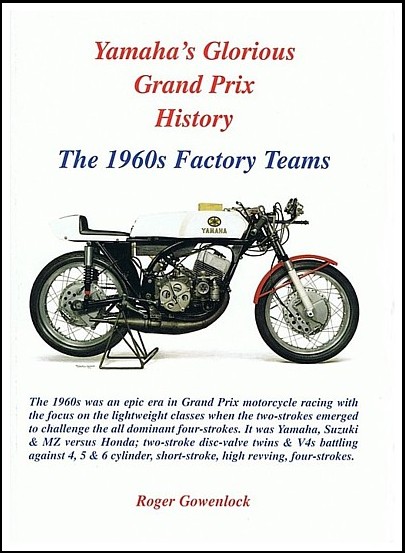 The author’s matter-of-fact style is born as a result of his collecting and studying in minute detail countless period magazine race reports and articles, combined with informal interviews with such luminaries as the aforementioned Ferry Brouwer and multi world championship winner Phil Read among others.

The book is divided into seven chapters, with a focus on the championship years between 1964 and 1968, a period of time before the FIM instigated rulings that effectively drove Honda and Yamaha from the championship, at least from a specialised factory racebike perspective.

Practice times, track layouts, race results and times, progressive championship points, fastest laps and lap records are all provided for each separate round of the 125 and 250cc championships, as well as the occasional 350cc race that Yamaha participated in.

Probably the most fascinating aspect of “Yamaha’s Glorious Grand Prix History” (for this reader at least) is the insiders look at many of the factory bikes from both Yamaha and Honda, as well as a few others, with detailed photos and in-depth study of the pros and cons of each being most enlightening.

The amount of detail on offer here is nothing short of astonishing. No-one before or since has ever analysed the mid to late 60s Grand Prix seasons to this level, providing facts, opinions, and forcing the reader to question why things happened the way they did.