Following on from the first part of the tale of recent events in the life of my brother Kerry’s big TZ, we’ll look at the rebuild from my point of view i.e. the one who had to do the work.  Mind you, I also got to spend someone else’s money to do it.  Without a doubt, one the highlights of my motorcycling life – how many people have been able to buy, rebuild and subsequently manage as required, a TZ750 and not have to pay the bills!  Sounded like a pretty good idea to me at the time, especially not being a race team mechanic and as long-term road racer and interested in older Yamaha race bikes.

In those well-founded words, “in the beginning”: The e-mail lines were burning hot for 3 months or so between the Middle East and NZ with: Could I contact Bob?  Were the bikes for sale?  What did he have?  How much?  What came with them?  Can you go and have a look?  Can you take photos? Which one do you reckon?  How many miles?  Any damage?  The list goes on.  I do remember advising that whilst it was easy as I wasn’t spending my own money, I’m glad I wasn’t really having to make the decision to choose between a two year-old 700B with some ‘history’ or a two race-old 750C with unknown motor.  Less work to rebuild, but….! As we know, Kerry went the 700B, which at the time was the right decision I think…and took the choice out of my hands later, to pick up the dregs (if you call a 2 race old TZ750C the dregs!). 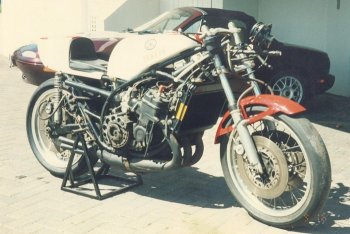 We got the bike home and initially the plan was to do the motor in the Team Wilton Yamaha workshops (Dad’s garage!) and contract out the cycle parts. Unfortunately that initial plan disappeared, as the guy who was to rebuild the running gear was moving house, so we went to “plan B” by accident really, as I had started stripping the bike.  When my wife had to work overseas for two months things really kicked in, as there was nil danger of her becoming the ‘garage-widow’, and I thought I might as well finish what I started.

In December we felt the key was to get the cycle parts well under way, as Kerry had decided that he’d like to ride the bike on his trip back to New Zealand in March/April this year.  This provided the necessary target, though it would be close – ten weeks or so to get the job done, so we parked the complete engine in a corner, stripped the bike entirely and surveyed the scene.  I had obtained a copy of a parts manual and worked my way from front to back and identified most of the parts or consumables we would need.  Various tacks were taken with the parts – some came via an NZ Yamaha dealer friend, some via ( an English supplier ), but were able to basically source everything we needed from one or the other during the rebuild.

The tank/seat/mudguard/fairing paintwork had been professionally completed and stored prior to purchase so that was no issue.  The frame, fairing brackets, hubs, disk carriers, rear calliper carrier etc – basically any of the “black” work was collected into one pile and sent on holiday with another local TZ rider who happens to be a spray painter in the aviation field.  A fabulous finish in a tough aircraft paint was the end result.  The dull plate zinc work was collected together including axles, chain adjusters, spacers, foot pegs and delivered to a local zinc plater with an example of what coating was required.

The frame and zinc work were back in no time and after de-embrittling the zinc work, we were quickly able to start the reassembly process, with frame, swing arm, rear mudguard, yokes etc all going back together in one day.  From here we progressively worked our way through the sub-assemblies like callipers, carbs and master-cylinders, replacing seals, painting where required and an ultrasonic clean for the carbs.  This latter operation is the only way to go with bikes that have sat for some time:  we have found in the past that normal manual cleaning methods can be less than satisfactory and really confuse the issue when the bike won’t run properly with minute dirt particles ever-so slightly obscuring a tiny passage.  A tame Yamaha dealer near us has the necessary kit.  One part we did replace in the carbs was the float needle jets as we have found these to wear and stick open.  The ensuing flooding is inconvenient and causes far too much pushing and hard starting.  They are not too expensive, but it’s one variable completely eliminated.

The wheels were stripped completely and the rims (plus head stud nuts) were polished and reanodised and rebuilt with new spokes and nipples.  By this point new discs had arrived from (England) and were mated with the repainted carriers (using replated bolts and nice new tab washers from (England) – not available from Yamaha) and delivered for tyres back to (a local Yamaha dealership run by a guy named Chris).  I knew we must be going down the right track when Chris’s eyes nearly fell out when he had a look at the smart wheels- all crisp black paint, new spokes and nipples and polished rims.  Chris insisted on protecting the rims on the tyre machine with rags! 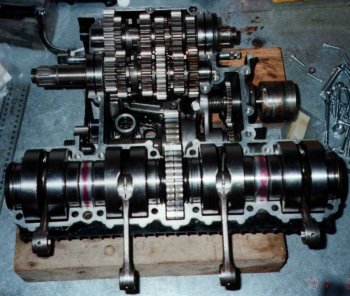 We eventually got around to stripping the motor and found the damaged bearings, pistons and heads Kerry mentioned in the last part, but otherwise it was very sound and we eventually reused one or two of the gearbox bearings (they were OK, but would have been replaced, except that NZ post lost the new ones!).  The cranks we rebuilt obviously and as expected, the 3rd flywheel in both cranks were cracked – visibly.  We replaced these two flywheels with two new ones already sourced and crack tested the whole gearbox and flywheel combination as a safety precaution (recommended).  (It’s because I have nightmares of the gearbox locking up at 10,000 rpm in 6th gear – Kerry)

One area that did take considerably longer than expected was the suspension.  The forks had rust under the chrome and the shocks had some dings in the shafts.  Hard chrome was an option, and the elegant solution, though we eventually had the forks dechromed, linished and flash chromed again (same as original), figuring they had lasted quite well with little maintenance, and we couldn’t be sure the hard chroming would be done in time.  The stanchions came up beautifully and were rebuilt with polished sliders.  The rear shocks, well, despite looking like they could be rebuilt, we decided to leave alone. We did make sure we had some borrowed replacements in case they gave trouble (which they didn’t despite dire warnings from the suspension man).  The original plan was to upgrade the forks to modern internals, though time beat us again (it’s on the list of things to do), and to use more modern rear suspension units (since replaced with custom-made units – fabulous), however neither could be done in time.  Besides, Kerry was idly keen to see what the bike was like with original kit.  Standard suspension refitted, Kerry home for holidays and we have a rolling motorcycle again.

The cases were repainted and we fired the newly rebuilt cranks in, and tightened it up, and as we tightened, so did the cranks….hmmmm.  Open it up again have a look, close it up, no luck. We eventually found that the labyrinth seals were just a touch tight in the cases and when tapped gently into place everything became fine.  One call to (an English supplier) later, we had the ignition timing sorted and the bottom end in the frame.  Over the next day or so the rest of the new 750D top end was fitted, carbs on, chain cut to length, cables sorted, exhaust pipes fitted, radiator on and filled and time for starting.

We left that one up to Kerry and was subsequently caught on film – suffice to say that we were all pretty pleased when it fired on the first compression, though it took a second push to get it to run continuously, as Kerry had used the choke and it didn’t need it.  (Then I stalled it - Kerry).  Basically, it burst into life nearly as easily as if it had been left only since last week, not after sitting since 1978.  Apart from one minor water leak it ran fine and was an easy starter all afternoon.  We know this because we played with it all afternoon.

Kerry then worked his way over the next week, from stem to stern checking, lock wiring and adjusting as required to get the details sorted for it’s first outing.  I have no doubt the neighbours put up with much sound during this time (only so I could strobe the ignition! -Kerry).

In terms of why we did some things and how: Kerry wanted a good-looking finish, perhaps a bit better than new (as that’s what people actually remember), yet a durable one, and some things were done simply as a precaution against damage or aged components:

Reed valves: Replaced the original steel reeds with some fibre reeds in case an old reed cracked and was ingested.

Gaskets/ Seals: Used new ones where possible.  They are cheap and leaks are annoying, inconvenient and ugly.

Calipers: Yamaha can still supply seal kits and once rebuilt the brakes calipers have been excellent.   We use SBS semi-metallic pads.  As good or better than the Yamaha originals, not too hard on the disc, and cheaper.

Zinc Plating: Well worth it – about 15 pounds/NZ$50 to replate all the fasteners, brackets, foot pegs and axles, springs, odds and ends.  Don’t forget to de-embrittle the part though (in the oven).

We farmed out various refinishing jobs e.g. seat cover, wheel building, crank assembly, etc, to the professionals rather than trying to do in-house – okay, costs a little more, but most times they have better kit and techniques than home mechanic has access to and thus a better result.  In this case, it was also a means of saving time through having several operations on the go at any one time.

As Kerry will only get to ride the bike a handful of times a year, he wanted it reliable.  The fact that the bike subsequently ran almost faultlessly ingrained our belief that the extra expense of replacing old seals, etc, was cheaper and easier in the long run than having a leak and not being able to use the bike.

At the end of the day, we where lucky with this bike.  Virtually all, the parts were on hand or available, good advice was forthcoming from people with proven experience and this bike had not been badly or unknowledgeably treated in its short competition life.  All in all, even the cost of parts, especially those from (an English supplier), were quite reasonable –there simply were twice as many of them as we were used to seeing on a 250/350.  Actually, the relative ease at which the project came together has prompted other TZ owners to consider using their twins and fours, parts are available and they are not overly expensive if the right sources are approached.

The moral of the story?  If you have an old Yamaha racer, use it and let others see it.  Get some real fun out of owning it – it’s not hard to do.

Postscript March 2002:  we have now run the bike over 200 racing miles and it has run faultlessly – not a miss or splutter, no leaks and more fun than you can imagine.

Note: All reference to specific TZ related companies has been edited from Alistair's story. the free ride for businesses is over.