The following article was written by Alistair Wilton. The first section gives us an insight into the Macintosh frame history, the second is Al's story of setting up his first road racer, a YZ125 believe it or not. 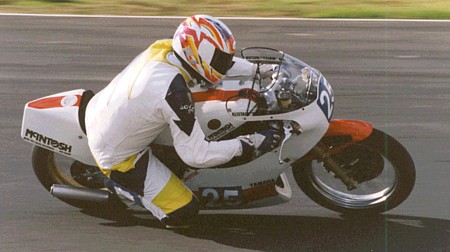 Like any other country, New Zealand has had it’s share of road racers, race meetings and bikes available over the years and as such New Zealand has a somewhat proud history of road racing.  Notwithstanding this, we are and always will be geographically remote from the US, UK and Europe where significant development of race machines and equipment occurs.

By 1979 a significant number of factory issue Yamaha TD/TR/TZ range had already been imported when the F model 250/350 TZ’s arrived.  As in previous years the new owners set about preparing and testing their new machines.  Like new F model owners around the world, those in New Zealand found the same things - namely fast but fragile.  Local anecdotal evidence  includes one owner who basically all but lost the front of the frame after the first day of use from various fractures (like 4 out of 4 tubes!).

What to do?  Well whilst in the UK there were and still are numerous frame manufacturers, these are all half way around the world. Our intrepid owners had 3 options:

At this point in time, Ken had been in business for a little time I believe and had already started cranking out replacement frames to wrap around big 4 cyl 4 stroke motors, mostly Suzuki GS/GSX range.  These Suzuki frames and latterly his range of Norton Manx replica’s are what Ken is most known for.

Various orders were received and a production run of 6 frames was produced for the NZ market.  The general layout, geometry etc was that of the original F model, but with some subtle and not so subtle differences.  The theory, which also worked well in practice, was that you could directly swap out the original frame with no other changes required.  Original suspension, frame, fairing, motor, seat etc could all be bolted straight in.

As it is now 20 plus years ago from when these frames were built, Ken has not kept the records of who the original 6 owners were, though we can confirm that only 6 were built, of which we have located all 6 still in NZ, all 6 are complete bikes again, one of which is still owned by it’s original owner.  I was doubly fortunate having owned two up until very recently - my original bike (number 25 in the photo’s) for the past 4 years which most of my riding of late has been on, plus which most of the restorative work has gone into.  The second bike (Number 43) was only purchased last year and I have recently sold to my brother (so it hasn’t gone far) to make room for another 2 wheel addition ( TZ of course!). 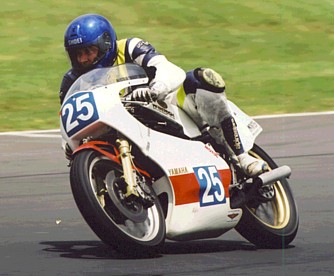 Along the way various stories have come out about the production run, like Ken getting to work one morning and welding all the radiator lugs on, only to find they were all in the wrong place.  So the story goes, that if he’d waited for one of the other guys helping him to arrive, they could have fixed the problem having identified it before going home the night before. This meant they wouldn’t have to cut one “ear” off the radiator cap to get it to fit, and all the steering dampers would be able to fit the mount on the bottom triple clamp! Additionally, the frames are somewhat “tighter” around the engine, which in my case means that to take the barrel off I need to take to motor out...though new engine mounting plates to locate the motor lower at the front can fix this.

What was also interesting after closely viewing the 6 frames over a period time, is that despite all being built in one hit, that whilst they are all the same, they are not exactly identical with minor variations to foot-peg mounts top shock mount, coil mounts etc.

Having only limited time riding an original F model, I’m not the most qualified (some would say my riding doesn’t help either!) to expound on the differing characteristics, but what those of us that have ridden an F and the McIntosh frame versions is that the McIntosh frame is heavier in the steering and feels better and more stable, the faster it is ridden.  This makes sense as apart from the frame being stiffer, is like any other TZ.  A friend who rode one of mine last year commented that the whole bike reminded him of his Honda RS250, only older and was extremely impressed by the handling.  His only negative comment related to some instability at high speed (flat in top on a long straight) which could be attributed to the 17inch front wheel and radial tyres fitted.  The fact that this was the only reported negative probably proves the general capabilities of the frame which was never designed for such things!

As an aside. I was talking to Ken about the TZ twin range a couple of years ago and his opinion at the time hasn’t changed - that Yamaha built the back of the cases too narrow and should have extended the rear mounts out to the width of the frame.  This would have stopped most frame breaks which occur on the left side, below the swing arm pivot which afflict both original and replacement frames.

Bit of a family affair really: Kerry (older brother) was racing a TZ250D and TA125 so we had a couple of handy guides to work from and Dad was handy with the welding set and lathe so over the space of 18 months we built a bike for me to race with what we could lay our hands on. It may be Frankenstein’s little brother but it sure has been effective over the years, as a certain 1990 RS125 rider can attest to a few years back when he got beaten by in more than once.  It is also the bike I’m least likely to sell - Partially because I’ve had it so long and I think because nobody would buy it!

What did we do?  Well we acquired a GT125 Suzuki rolling chassis (early-mid 70’s two stroke twin commuter), forks wheels brakes, swing arm etc and a 1 year old YZ125 (yes the YZ is a motorcrosser...) motor pipe carb ign, radiator and set about trying to make it all fit together.   Firstly we spent a couple of nights with hacksaw and angle grinder taking every bracket off the frame and loosely assembled swingarm, forks wheels etc and put the motor in the appropriate place.  It was here that we found our first problem, centre exhaust port motor and single down tube frame, hmmm.  So we roughly worked out where to locate the motor and shipped the whole lot off to Ken McIntosh who cut the whole front and bottom part out and converted the frame to twin down tube to make was for the exhaust. He also braced up the swing arm, a la AMA superbike about the same time (we’re going racing you know and we don’t want these things flexing!).  Rear suspension was some random BMW R100RT (yes the big boxer tourer) shocks dad had lying around.

From here on it was a fairly simple measure of making and welding on the various brackets etc for the components we needed.  Until we came to the radiator - how do you fit a radiator between the frame and the front wheel on a bike that was not designed for such things?  You don’t!  Where we did find room was in front of the rear wheel - pretty avantgarde for a home built 125 in 1983, John Britten, Saxon, Drysedale et al, eat your heart out!  One other technical marvel designed in from start was we used the frame to route water around - rather than having long water hoses to the radiator.  Can get a bit hot on the leg at times but also adds some extra cooling area!

Come September 1984 we finished remodelling the original YZ exhaust pipe, added an A100 Suzuki tank a racing seat, roughly sorted the carburetion and headed off for my first ride, a test day at the local circuit.  I lasted three laps before it seized, spat me off over the high side and I broke my ankle 3 days before some rather important exams at school.  Oops!

Things went a bit better from there on, we straightened it out, I healed and my first race meeting came around, the Auckland round of the NZ road racing championships (nothing like straight in at the deep end!).  I remember finishing last and riding the whole way with 4 fingers on the clutch and I still hate the corner to this day.

Every year that I rode it from 1986 to 1991 in the local club championships I never finished lower that 3rd overall, usually second and won in 1989.  The bikes that did beat me were usually TZ125, Rotax or RS125.  Also over this time it endured some development of both the running gear and motor.  Running gear was adding of better streamlining, ditching the original GT125 front caliper and master cylinder and removing ONE of the rear shocks as they were too stiff on the lowest preload.  Well they were BMW shocks and it was okay for their bikes!  In all honesty, with some preload added it worked extremely well, with no side effects and is still like that now.

Motor-wise over it’s life, apart from the usual crank rebuilds (it blows the big end occasionally due to too much rpm) , rings and pistons, it has also been subjected to the usual reed valves, carb boring etc and a port job and exhaust pipe from Kerry when he had some free time (that and a full rebuild of the bike).  The port job and a pipe based on a TZ125 really made the bike work and helped it up a level performance wise.  The basics of what Kerry did included a general clean up, reprofile of the squish and raise the exhaust porting timing (when power valve was fully open) to 209 degrees (TZ125 was 202 degrees)!  It revs so hard in this configuration, it starts vibrating and then goes smooth again and it’s still making power, yet the YPVS capability still allows it to work at low rpm

My final season on the bike was 1991 when I bought a 1990 RS125, but both Kerry and an old friend (Jason) raced it with considerable success during 1992 and 1993, where one father of a current RS125 rider was seen asking what we were feeding it!  Until the Historic 2000 race meeting in Sept 2000 the bike has basically sat with little or no use since 1993.  We dragged it out, did some minor maintenance and put Jason back on it, he went out and won 2 out of three races.  After the meeting an MTR125 rider said to me tongue in cheek don’t bring your mate or bike back