Click on the links below to read each review: 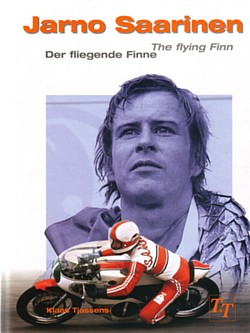 Being a Saarinen fan, it was with much anticipation I waited for this book to arrive from Germany. I wasn't disappointed !!

Klaas Tjassens has done a remarkable job writing it, though by his own admission in the introduction, he considers himself the “co-ordinator” of his book, as opposed to the “author”. He gratefully acknowledges the assistance given him by around 50 different people and organizations by supplying their photos, records and most importantly, memories of the “Flying Finn” and the huge influence he had on all those lucky people who’s lives were touched by him until his death in 1973.

Klaas has managed to piece together the most comprehensive and complete story of Jarno Saarinen that I’ve ever come across and goes into great detail about his life and times in a very easy to read format that keeps you enthralled. From his early childhood, through his riding and racing experiences in Finland on both ice and road, to the hardships, he and his ever-supporting girlfriend/wife, Soili went through, living in a tent on the GP circuit until Jarno finally got a works ride and chose hotel accommodation.

Inevitably, as the book nears it’s end, we see it turn and concentrate on the accident in the 1973 Italian GP at Monza in which Jarno and Renzo Pasolini tragically lost their lives. Several people involved in GP racing at the time were interviewed regarding both Jarno as a rider, and their thoughts on the accident. Probably the extensive chat with Walter Villa, who’s Benelli 350 has long been suspected as the cause of the tragedy with it’s supposed oil leak, the most interesting. The late Walter sheds new light on the extent of his machine’s oil leak and certainly makes one wonder if the history books have the story wrong. Read it and draw your own conclusions, if that’s possible.

“Jarno Saarinen, the Flying Finn” has been published in German/English, meaning that each page is divided into two columns, the left in German and the right in English. Despite this it is an effortless read and apart from the book’s obvious historical value, it’s strength lies equally in the 221 photographs of Jarno and those around him, many of which have never before been published.

“Jarno Saarinen, the Flying Finn” is available from:

Thanks go out to the author Klaas for providing a copy for us to review!

“Foggy on Bikes”  by Carl Fogarty

Carl Fogarty’s second book entitled: “Foggy on Bikes. Learn how to ride Like A World Champion” claims to reveal what it takes to become and survive as the world’s premier motorcycle racer, and to a limited degree I guess it does in a way, with some great tips here and there, though sadly in all too limited quantity. What Carl gives us for our hard earned $Aus 22.95 is basically a series of anecdotes and information about himself and those around him in his typical self assured, vain manner. 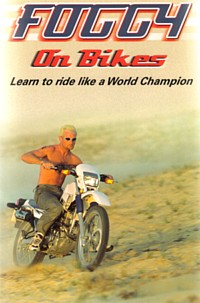 For someone who has watched every one of Foggy’s World Superbike Championship rides between 1994 and 2000 and wondered exactly what his problem was when he failed to finish on the podium this book is great. When watching TV and Carl finished in fourth place or lower we the viewers would miss out on hearing the excuses and blame passed into other people, tyres or machine, because he obviously wasn’t interviewed. Here in “Foggy on Bikes” we get to read all that juicy stuff all about how he was never simply outridden by his opponents, the blame always lay elsewhere. Incredible but apparently true according to Carl.

On the other hand, the stories he has recounted about his experiences both racing professionally and riding casually over the years are absolutely brilliant and highly entertaining, especially those involving such people as his former mechanic Anthony “Slick” Bass. The book is probably worth purchasing for these alone!

The tips to be found in the 322 page offering vary from very useful, eg. “Adjustments”, to pretty pointless, eg. “Celebrations”, and everything in between. There are more than 50 black and white photos throughout “Foggy on Bikes” and two separate sections containing a total of 40 simply superb colour shots from years gone by. Excellent.

The distain Foggy felt for most of the rival Superbike riders who were capable of beating him is quite clear and laid right out for anyone to see in places within his book which adds a little “spice” to a still fairly good book.

Glancing at the front cover of the paperback version of the book in the local bookshop and seeing a shot of the author riding across a rocky section of desert at speed on a dirt bike without a helmet or even shirt on, the first word that came into my head ( sorry to any Foggy fans, but it's true ! ) was “dickhead”. Thankfully the hardcover version appears to have a far more responsible photo of the still helmet-less four time World Superbike Champion. At least there he is just sitting on a bike and not riding it!

“Foggy on Bikes: Learn How to Ride Like World Champion.” is not the motorcycle racer’s “bible”. If you’re a fan of Carl Fogarty it’s probably well worth buying. If you’re not then it would be advisable to have a quick flick through the book at the store to get a feel for it before opening your wallet.

Reading a book from cover to cover in a single sitting is not something this bike racing fan does very often, but today I found that all the things I had intended to do after reading a few chapters of “Barry Sheene 1950 to 2003” this morning were put aside. Stuart Barker’s book had me enthralled, it demanded to be read, completely. 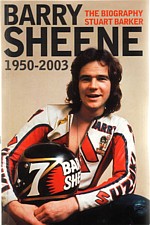 Mr. Barker has written one of the most interesting biographies I have ever read, drawing on a number of highly respected publications, as well as his own observations and interviews he had conducted, to compile what is quite simply a brilliant book.

“Barry Sheene 1950 to 2003” covers the Sheene story from beginning to end very comprehensively. From his earliest involvement in motorcycle racing at mechanic / engineer level, to “running in” bikes for other riders before they raced them, making his own race debut in 1968, then rocketing through the ranks to reach the pinnacle of motorcycle sport, the 500cc World Championship in 1976. From there Mr. Barker takes us on a roller coaster ride through the ups and downs of the late Barry’s life until cancer stole him from us in 2003.

Along the way we are treated to some hilarious snippets of his escapades and sharp wit, as well as a look at the lifestyle which helped to create and maintain the “playboy” reputation and immense popularity worldwide the great man enjoyed throughout his all too short life.

The book includes 23 black and white pictures and 25 full colour ones as well and is without a doubt $Aus18 well spent !!

Back to the "Reviews" page