The story of the purchase, rebuild and first use since 1978 of my twinshock TZ750 is probably like many similar projects all over the world.  There are the usual themes:  the need to own the bike, the agonising over how much it cost, the search for parts to make it more than a museum piece, and the usual effort to make it look and run the way it did in its heyday.

In this case there was one complicating factor: the bike was in New Zealand and I live in Dubai, in the Middle East.  However, we have worked around that, but I’m getting ahead a little. 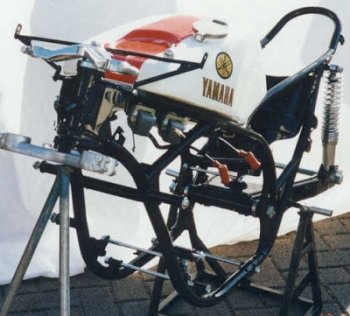 My interest in TZ started in 1981 when a friend lent me his 350B for a few laps at a club meeting.  To that point I had only road-raced an RM125(!) Suzuki, and a variety of British bikes, mostly BSA’s.  Four laps and I was hooked.  My 450 Desmo Ducati went, and its place in Mum and Dad’s garage was promptly filled with a very tidy TZ250C.  This bike taught me more about riding than 10 others.  Club-level results were OK on the 250.  Perhaps it was this and my ‘budget racer’ status that led to useful practical advice and spares at economical prices from  an Auckland (New Zealand) Yamaha dealer and long-time road racer.  At that time, hidden in the back of Bob’s shop was a 750 twinshock TZ.  It hadn’t been used for a couple of years at that point (more on that later), and hadn’t been regularly raced for a couple more, as Bob had bought a 750D.   Being familiar with the way the 250 made its power I couldn’t imagine what the 750 must be like.  All I could do to satisfy my curiosity was to collect a few period magazine articles in which proven riders did their best to describe the 750 against the standards of the day.

Seeing a TZ750 in use in New Zealand was not common at that time, as the international Marlboro series had folded in the late seventies.  (Not that there were ever very many 750’s in our part of the world.  Currently, we think that there might be 12 in the country, mostly twinshock bikes).  Even if I could ever afford to buy one, the running costs alone would surely keep me poor.  In 1981 Bob told me that the 750 cost him (at his prices) about $5 per mile to run.  At 2001 prices, I believe that it is currently NZ$20/mile, or a little under 8 Pounds/mile.  Never mind all that, I thought, as I was sure that the value of the 750’s would grow faster than I could save and put them out of reach of bona fide thrill-seekers, I mean users (like me!).  Consequently, from then until late 2000, I raced the 250C, 350B and F, TA125 amongst others, with some time away courtesy of 15 years in the Royal New Zealand Air Force.

In 2000 some things changed.  Out of the air force and into a job in the Middle East released some funds and I needed a new toy.  About this time we heard that Bob had decided to sell his collection of Yamaha road-racers.  Unbelievably, the 750B and a little used 750C were available, the 750D having been sold several years before.  I asked my brother, Alistair, to have a talk to Bob.  He did.  The price was competitive with those advertised for sale overseas and a few spares would come with either bike.

In August 2000 I had to make a decision about which to buy: the ‘B’ or the ‘C’, or a (likely) well-used unknown bike from overseas?  How to choose?  In the end I settled the 750B  in New Zealand.  The bike was actually a 700 (with it’s original barrels) and though sold in 1975 was not used until about 1976.  Bob was the only owner and had had two minor ‘get-offs’.  The only part missing was the clutch lever and mount - a battle casualty (and I had a spare).  It had had one (we think) engine rebuild, though it was at the end of its second rebuild when it was parked, and was fitted with ‘one up, three down’ exhaust pipes – apparently the first set made for a 750 by New Zealander Mike Sinclair (at the time of writing, head engineer with Max Biaggi).  The original pipes were there too.  Nothing was butchered, bodged, damaged or rounded, i.e. the near-perfect rebuild proposition.  The only drawback was that the whole bike was quite ‘tired’, having sat for 20+ years, and required at least cosmetic attention to every part.  Incidentally, the last person to ride the bike was one S.M.B Hailwood prior to his I.O.M. return in 1978.  At the time Hailwood lived in Auckland and rode both the B and D 750’s on many practice laps of the local circuit.

As a short sidebar, Hailwood probably rode the 700 until he heard or felt two of the crank main-bearing cages start to break up.  This was how we found the motor.  Fortunately, most of the missing cage pieces had gone out the exhaust with no damage, other than to the heads and pistons.  Hailwood also rode the 750D and broke the crank, which Bob still has.  During those laps Hailwood had apparently gone faster, on his own, than Greg Hansford around the same circuit on the works KR750 only a few months before.  Hansford’s lap record was to stand for about five years.  Hailwood had unofficially broken it after less than 10 laps on the 750D, having previously only driven a car at the circuit.  Incidentally, an editor of a current New Zealand motorcycle magazine was the ‘mobile chicane’ for Hailwood, riding around and around on a street bike.  Hailwood had to negotiate his way past the street bike, simulating passing lapped traffic, as and when he came upon it.  The street-bike rider recalls being scared to death by Hailwood coming past him at the most unbelievable pace in the most unbelievable situations where there seemed to be no road to spare, in safety.   Perhaps the really good guys really are in a different world…anyway…

The other purchase option was the 750C, also owned by Bob.  This bike had been on display in the shop for about 18 years also.  The frame and running gear had done about two meetings or less from new, though the motor had been in a Nico Bakker frame for a couple of years and used to win at least one New Zealand Marlboro Series race in 1977 in Stu Avant’s hands, before being reunited with its own, original frame.  The frame and running gear were completely original with the exception of a missing steering damper and D model front disc carriers, though the motor was an unknown.  We still believe the engine may have only done about 2000 miles.

At the end of the day, it was ‘head or heart’ decision – 700 needing more effort with a little more historical interest, or the 750 needing less effort.  In the end I went for the 700. Motivated by me buying the 750B, my brother Alistair eventually bought the 750C from Bob, so we have a matched pair (as well as a pair of Ken MacIntosh-framed 350F’s).   I also bought new 750D heads, barrels and pistons from Bob for a little extra.

Adding to the motivation was Trevor Taylor, a TZ racer with quite a few interesting bikes, who lives two houses away from my parent’s house (where my bike would be kept).  Amongst his collection was a recently purchased 700A. Sitting on Trevor’s bike and talking to him about what it was like to ride all lead to a big dent in the bank balance. The plot is now to take all three bikes to selected events, as if one will ride the 750, the others will make a day of it.  Otherwise it’s 350’s all around.  Incidentally, the three bikes make a twinshock set – 700A, 700B, 750C.

( Picture: Kerry's bike as he found it.)

Throughout the negotiation, purchase phase, and for the majority of the ensuing rebuild of my 750B I was restricted to following progress through photos, email and phone calls.  With luck, some of the photos are reproduced here and may show how ‘weathered’ the bike looked when we got it home.

Next time I’ll write about what Alistair did to rebuild it, how the engine went together, and how it ran, first time out.  As a teaser, the short answers are: save yourself time and talk to (an English supplier) if you need parts in info, and it ran near perfectly.  We have since had it on the dyno and it made 114 hp @10,300 rpm, at the wheel with a stock 750D top end and home made pipes for the 700 cylinders, without playing with it.  Since that dyno run, we have heard that the dyno we use is notoriously pessimistic...we’ll get a comparison soon..