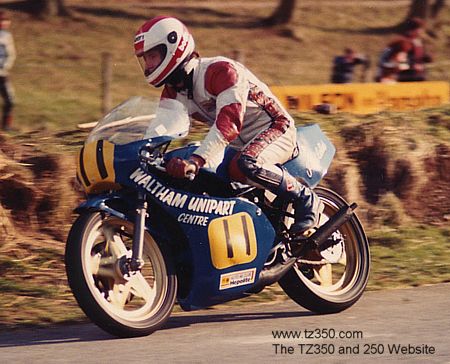 I raced in the United Kingdom for 11 years, much of this time was spent aboard various TZ350s, in the late seventies and early eighties they were the most successful thing’s around at any level of the sport, I won several unlimited capacity races on mine at various English circuits even when up against it’s bigger brother’s the TZ750s, and Suzuki RG500s despite giving away some serious cc’s, this was possible because the 350 was a superb all round package, sure the 500s and 750s would reel you back down the straights but you could brake later and carry much more corner speed, and to be honest, on all but the very longest straights the big stuff couldn’t pull that much back on a good 350 pilot because of the fact that the corner exit speed of the 350 onto the straight would be higher and would slingshot the little twin away down the straight and out of reach.

Giant killing became a regular weekend pastime for the TZ350 and it’s pilots, on fast circuits you needed to get a good start, you could then use the clear road and run fast sweeping lines to keep your corner speed up, on short twisty circuits a bad start simply meant some mad late braking and a bit of ducking and diving to pick off the big stuff.

I also ran a 373cc motor utilising a TZ750 cylinder block, head and pistons it was a regular winner on tight twisty circuits, it had loads of bottom end torque and drove out of dead stop hairpins without any clutch slipping, but was slightly slower than a 350 at the top end, maybe if I had spent more time on jetting and had some proper exhausts made to suit, it would have been quicker, it’s a very easy conversion to make as all the bits drop straight onto the 350 bottom end.

I class myself as being very fortunate to have been around and racing these things in their heyday, I am even more fortunate to have gleaned information from, and been taught how to look after my TZs by some of the country’s most respected riders of the time namely people of the calibre of Derek Chatterton who’s 350s twice saw off Giacomo Agostini’s MV at Cadwell Park in the early seventies, Neil Tuxworth (now Castrol Honda WSB boss) who was a top flight rider and had a superb knack for setting TZ motors up and many others who passed on their expertise and experience to me, I soaked up knowledge like a sponge in those days as I was eager to learn everything  that I could about these motors.

One common factor in all the set up and maintenance advice that these people passed down to me, which from my own experiences I also fully endorse, is that ‘balls out’ tuning of these motors is not necessary or advisable, with the TZ350, Yamaha designed an incredible product, Derek Chatterton and Neil Tuxworth both impressed upon me that gentle cleaning up and blueprinting, along with careful assembly, regular maintenance and a good set up are the most important things to do with these bikes, that is unless you think you have more knowledge than Yamaha’s research and development department!

Certainly from my own experiences I stuck to this advice and had very few mechanical DNFs in my career on TZs, and my bikes were always amongst the quickest around, I used to see the same guys at the various circuits every weekend with their trick barrels, ignitions etc etc, they would tell me how fast their bike was with this weeks special mods, problem was they rarely if ever actually finished a race!

Here are some of the things that I learnt over the years, I hope they will be useful to other owners, they relate mainly to 350s

Pistons  ‘E’ or ‘G’ were the best, ‘F’ pistons were the first of the short pin ‘slipper’ type but the side windows didn’t have the support web running down the middle, the ring sometimes pulled the edge of the piston down into the window, I saw many low mileage failures.

I used to clean up the edges of the skirt to give a smooth finish and always popped the ring peg over to stop it being fired out of the piston crown which was another common occurrence, to do this look for the tiny hole on the crown through which the ring peg is inserted during manufacture, place the tip of a centre punch right next to the hole and hit it to burr the hole over.

Circlips  I used part number 4V2 circlips, I think they are RD400 items, they don’t have a tag, and I used to drill a small pilot hole through to the edge of the groove on the piston so you could get them in and out.

The tags on the standard circlips normally only break off during use if you have an out of true crank; this causes the pins to thrust against the circlips.

Heads The early heads ‘A & B’ are lower compression, I always ran these, and found that I could run the ignition at 2mm BTDC with no detonation and giving a quick, revvy motor, they are distinguishable by the concave corners on the outside edges of the water jacket, detonation was never a problem on the ‘A or B’ and this is why. 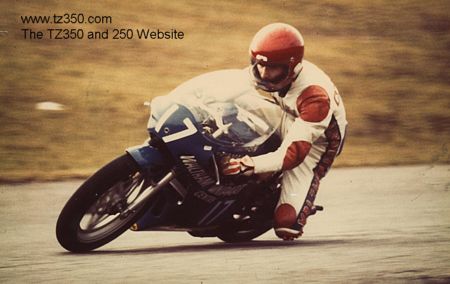 Cranks The main benefit of the later cranks was that the ignition side was stronger with the external thread, the early crank with the internal thread was ok with Femsa ignition, but people who ran Hitachi ignition found that due to the weight of the rotor on the end of the crank it could sometimes break the end off.

Hoeckle cranks were great but needed Yamaha rods fitting, around 1982 the Hoeckle rods snapped continually, I wrecked a motor due to this, as did many other people.

Gearbox I Always found the gearboxes to be superb, I used a very light gear oil such as Castrolite, some people used automatic transmission fluid, but it’s too light and bearings start to wear very quickly, nowadays there are plenty of light synthetics available.

These motors have been known to pop the gearbox sprocket oil seal out, Not very nice as it dumps the gear oil all over the back tyre!!, some people made and fitted retainer plates over the seal, all this will do is cause another seal to pop elsewhere.

The problem is caused when the primary side crank seal is getting lazy, it allows the gearbox to be pumped up by crankcase pressure, I used to change seals regularly and also as an added precaution I always removed the standard gearbox breather stub, cut off the little right angled pipe connection (I believe the inner diameter is too small as its actually an RD part) and then drilled right though the stub with a 6mm drill bit before fitting a nice big piece of breather pipe right over the whole stub, this meant that the gearbox could breathe more freely.

Clutch  The clutch centre boss can crack as it is a cast item, pattern ones milled from solid are better and less expensive.

Sometimes during re assembly you may find that the clutch basket is locking up onto the centre boss when you tighten the centre nut, this is caused by the small drive gear which is pressed into the back of the big primary gear starting to move away from the primary gear, take out the primary gear, look closely and you will find that you can slip a feeler gauge between the pressed in gear at the back, and the rear face of the primary gear, drive the small gear out, coat the sleeve with Loctite Bearing Fit or similar, then drive it home again.

Ignition  I always ran Femsa ignition and found it to be fine, true you cant adjust the cylinders separately, but you shouldn’t need to, if you do it probably means you have a twisted crank or cracked flywheel!.

Jetting  This is critical to get the best from the 250, but the 350 runs better slightly rich, it keeps things cool and top end actually improves, try it and see.

Fuel/Oil  if you are using power jet carbs and caster based oil such as Castrol ‘R’ don’t go any richer than 24-1 with the oil, too much oil means the mixture cannot flow though the power jets and the bike will run sick, nowadays the best thing is to run synthetic at 30-1.

Hope this is helpful

Thanks Paul for an excellent article.