Click on the links below to read some interesting articles: 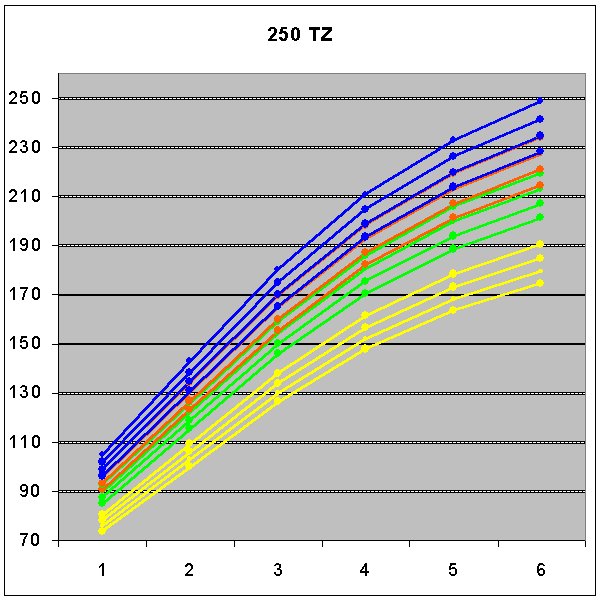 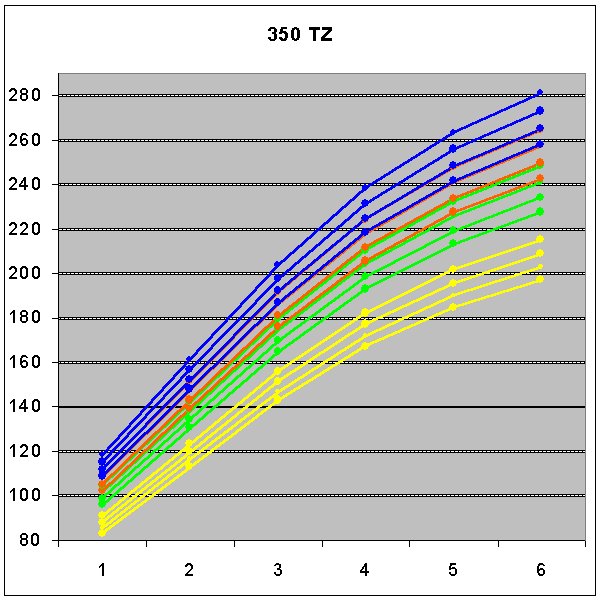 Thanks to Pierre Mazaloubeaux in France once again for providing these helpful charts.

John Storrie runs a sidecar fitted with a TZ350 engine with his passenger Ian Dagg in the UK based FSRA F350 sidecar championship. 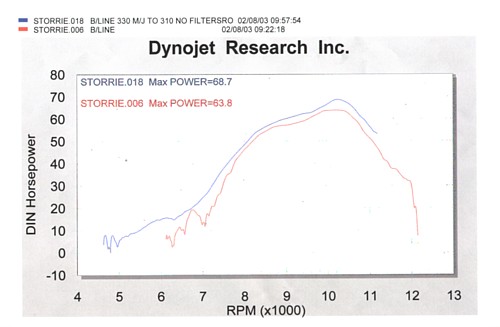 They recently had the transfer ports opened out by their tuner and the crankcase mouths opened to match.
They also had 1mm machined off the barrel base to alter the port timing.

The red line is the initial run(s) which was with the following settings:

The power change is amazing, we are actuallly making the front wheel light coming out of hairpins, almost wheelie time.

The tuner did a great job and he is looking into getting barrels made to this pattern as the torque reading is also good, virtually flat from 8000 to 10500 at 35.4 ftlb.

Click the image left for a look at the printout of Kerry Wilton's recent dyno-run of his TZ750.

Kerry says he just stuck the bike on the dyno, without any tuning at all and is pleasantly surprised with the figures.

750 crank cases have too much volume for the size of the intakes carburettors  the bigger the better, Russ recommends  41.3 Lectron HV`s .

TZ750 porting:   Raise the exhaust 1mm and 1mm on each side blend corners to a D shape. Lower intake port floor 2mm.  Open the rear boost ports as wide as possible without endangering the ring endgap. Do not
raise any transfer ports. (Russ Bigley)

Having spent several years in the late 1970`s tuning one of these awesome engines for sidecar use I have often wondered if the modifications I made were infact beneficial or were the results we had just down to a very gifted pilot.

Here I hope to analyse the 750 using some of today’s software and see what happened a bit more accurately than by the seat of the pants, which was all we had back then.    This is how I measure the old cylinder I have, which may or may not be quite   standard.

The time area (Ta) are calculated using TSR software, a big relief, after having spent hours with a pocket calculator in the past when all I had was “Jennings’ formulas.

My first attempts at tuning revolve around the exhaust port, as it was obviously not as wide as possible, infact only about 68% of bore width.

Widening and squaring this made a noticeable difference. So can we prove it? Lets try TSR again. Using the target Ta program and 10500rpm as revs of peak Hp& expecting about 30Hp/cyl for 6.5bar bmep it shows a requirement of 11.4585 Ta Exh,

Blow down (Bd) Ta of5.271 and Transfer (Tr) Ta of 6.5485. So yes the exhaust is small but also the blowdown is on the large side. This may be why the engine was able to rev and rev as the port was enlarged and became better matched. Lets try a simulated dyno run using another piece of software MOTA6 with engine data standard other than the widened (75%) exh port. 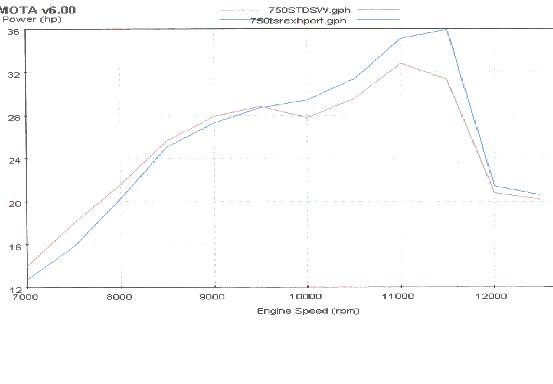 This graph shows a marked increase in HP at the higher rpm and a higher rpm of peak HP. There is also a power loss but of less significance at low rpm.

While knowing little about transfers at the time they were there, so had to be investigated. This was done in the form of lowering the cylinder by 1mm and returning the exhaust port and compression back to original. Lets try another run of this and see what happens. 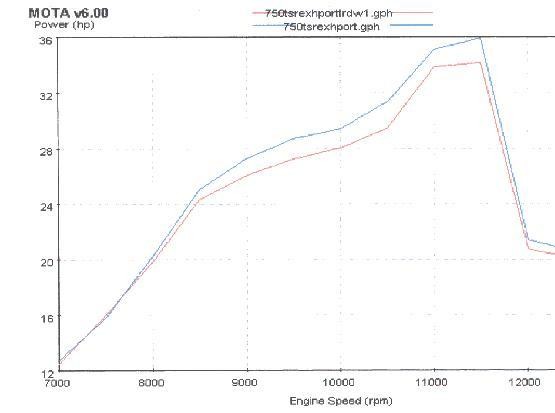 Here I seem to have gone astray somewhat, in that the power curve has dropped although retained the same basic shape I would think, the transfer flow has been restricted, by too much reduction of the area.

This was about as far as I went with ports on the 750 at the time due to tragic circumstances. I did however do a lot of work on exhausts concurrently, but that needs another article. To conclude this one I have, for my own satisfaction, to find out what went wrong with the transfer manoeuvre and get some idea what the engine was capable of using the computer.

So, lets check the blow down Ta and transfer Ta with TSR

Crunching the numbers shows that yes, I was right to drop the transfers but not as much as I did, in fact, to reach a blow down Ta of 7.5474, which is needed, the transfers only need dropping .25mm for a timing of 115.16atdc.

Time area for the std transfers is 6.3406 and we need 7.3406 therefore dropping them as far as I did may have helped the blow down but caused a deficiency in transfer flow even greater than standard. So now we need to widen the ports to reach the required Ta value. I have never seen an OW31 cylinder in the flesh but, I understand, they have 6 transfer ports and, this fits the logic of what we are doing here.

Lets try another dyno run with this data: 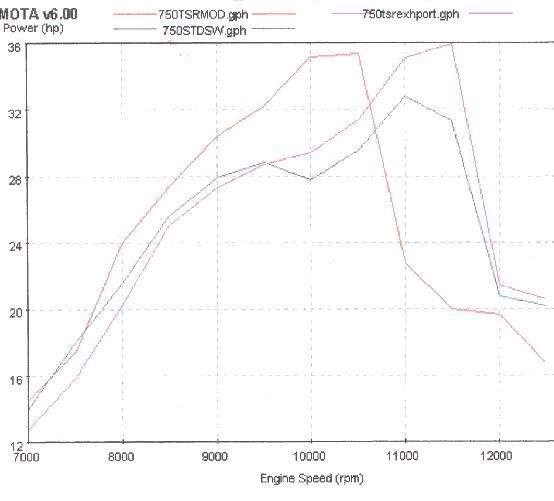 This run shows HP up and mid range vastly improved also, peak HP is at the correct 10500rpm. Mission accomplished? As long as the transfers can physically be widened to suit the area needed then, yes. Other wise the transfers need to be raised to get the area, the exhaust rematched and the head recut to correct the compression.

So, in conclusion, I think I can claim to have been heading in the right direction even if, I did not go the full distance.

Thanks go to Phil for taking the time to prepare this remarkable report ! 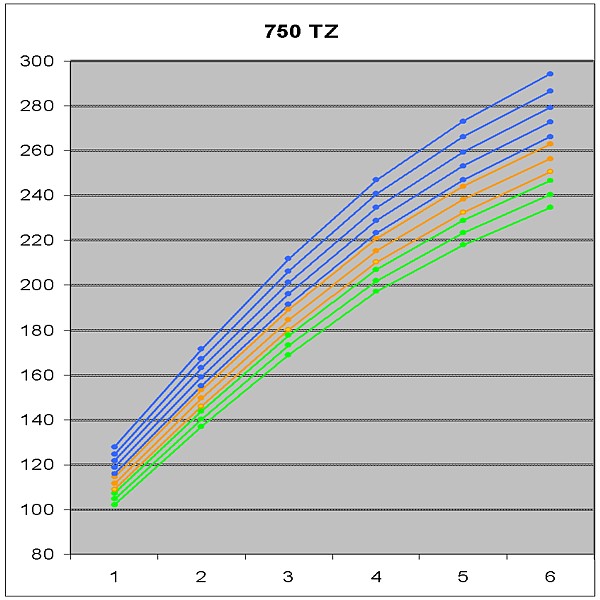 Note: You will need to download the data from the links then open it on your own computer. (It needs the Macros to run properly by the way.)

Thanks go to Gary for providing this fantastic spreadsheet!