In 1965, while working for Autodynamics, Inc., a builder of Formula Vee racing cars in Marblehead, Massachusetts, I had the misfortune of wrecking my new CB77 Honda Super Hawk by broadsiding a large sedan. Being unable to afford a new frame, I designed and built one using my race car chassis experience.  Autodynamics' owner saw the eight-pound result as a commercial possibility and bought the rights from me.  When we had a falling-out some months later, I repurchased the rights and set up The Yetman Corporation with the financial backing of a friend. 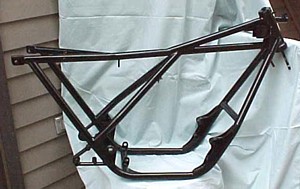 The TD1 frame pictured is the one raced by Frank Camillieri in the 1969 Canadian GP.

The frame I'd developed (and later patented) was a pure "spaceframe", meaning that all of its structural members were triangulated, either in compression or tension.  The design derived its strength from its form, not its material.  Its configuration and greatly reduced mass were facilitated by the fact that the engine was used as a structural member, much as the British Vincent motorcycles had (with checkered success) some years earlier.  Of course the design had its drawbacks; since no loads could be placed on the frame members other than at junctions, mounting accessories required some care and ingenuity; the frame itself was quite fragile without the engine in place, and because the design used very small-diameter, thin-wall tubing, I didn't feel comfortable with its use off-road. We always stressed that the spaceframes were intended for road racing and street use only.

(Either my anxiety was misplaced or users took me at my word, because we never had a single reported instance of failure of a spaceframe.  I'm convinced, though, that there had to be some failures that remained
unreported, since motorcyclists are notorious for disregarding warnings such as mine.)

The frame's design was radical enough to attract a bit of media attention and we encouraged that by promoting the "spaceframe" label and concept.  Some of the earlier claims of overall weight reduction for the
Honda cycle were based on Autodynamics' optimistic evaluation and, being quite unattainable, were later dropped from our literature.  The frame was introduced with a road-racing style fiberglass fuel tank as an
option.  The original tank was quite large and was designed to have its two halves joined at its beltline, a situation that soon became an extreme stumbling block in manufacture, so the tank was redesigned to be
joined at its lower skirt and reduced in size.  The tank was later joined by a road-racing seat, battery box and other bracketry on the options list.  We also offered more conventionally designed frames for the CL-72/77 Scrambler, Ducati 175/250, Honda 450, Triumph 650 and did a very successful one-off Harley Davidson XLCH road frame for a Cycle Magazine project.

Since I had temporarily been joined by a partner, Frank Camillieri, who had an existing road-racing sponsorship from a dealer, I designed a frame for the Yamaha TD-series road-racers and obtained Yamaha's
reluctant blessing for having it AMA-approved for their sanctioned events.  One of the design concepts I'd implemented in the original spaceframes was to transmit the forces applied to the swingarm pivot as directly as possible to the gooseneck, thereby ensuring that the front and rear wheels retained their position relative to each other.  While it wasn't a spaceframe, this was applied  to the Yetman TD frame much to our advantage.
The frame made a dramatic  improvement in the TD's handling, especially when accelerating out of corners at speed.  In its initial outing at the first Canadian GP, ridden by Frank, it was the top non-factory finisher in the 250cc class and fifth overall.  The frame also stood up to the TD's vibration which so famously destroyed the standard  frames so quickly.  While Frank was involved in the operation, we also built some Ducati frames (which are still winning vintage races) and a few frames for the tiny Yamaha 100 twin, which was great fun, but as you might imagine, was not a commercial success.

In retrospect, it's clear that a majority of the non-drag-racing frames we manufactured ended up in cafe racers on the street.  Very few were used in competition simply because, A) four-stroke bikes were uncompetitive and B) most roadracing at that time was AMA-controlled and getting a frame approved for use in those events required the approval of the bikes' original manufacturer.  I've always surmised that the manufacturers' co-operation was hard to come by because it would've been a tacit admission that their stock frames left something to be desired. 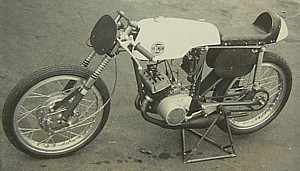 In late 1966 we were approached by a local Harley-Davidson drag racer who'd been attracted to the workmanship of one of our frames he'd seen. Although we pled ignorance of drag racing's requirements, he just wouldn't take no for an answer, so we laid out a design and built a prototype for his use.  As I remember it, his first outing with our frame resulted in a local track record, four orders and a couple of suggestions for further improvement.  By 1968 one of our fully evolved units had set a national record in AA Fuel and we were having trouble keeping up with orders.

While all of this was great fun, it was quite limited commercially, as there were just three people who could meet my workmanship standards and the units were entirely hand-built.  So we used our name recognition to
open several other local businesses in the motorcycle field.  They became very successful and demanding of my time, so I made the decision to close up the frame business.  We retained the manufacturing facility and used it for contract fabrication work for local electronics businesses, manufacturing production "hardtails" for the chopper trade and the occasional frame modification for our other customers, but closed it entirely when we got out of the motorcycle business in 1976.

The original CB72/77 spaceframe was offered in two versions, competition and street.  They can be told apart by the width of the upper bulkhead crossmember at the rear of the fuel tank. The competition model was about 6 inches wide; the street model was reduced to about 3 ½ inches to facilitate the mounting of a wider range of fuel tanks.  The increased width of the former gave the frame greater resistance to torsion by
widening the base of the triangles involved.  Other differences, not visible, were the use of 20 and 18 gauge (wall thickness) tubing in the competition unit versus 18 and 16 gauge (thicker) in the street model.

All of our frames of all types were fabricated from low-carbon drawn steel tubing and brazed (not welded) with a high-silver-content, low temperature brazing rod.  The goal for using this combination was to avoid subjecting the base material to temperatures that would stress the tubing and require later stress-relief treatment.  This was quite a departure from the "normal" practice of people like the Rickman brothers and Alf Hagon in England, all of whom I believe used welded "chrome moly" tubing.  Our approach was vindicated by the absence of even a single reported joint failure.  (One of our original collaborators on drag frame development was tragically killed in 1969 when his machine hit a guard rail at the end of a run.  His overly-lightened rear brake backing plate collapsed upon application of the brakes and jammed the rear wheel, causing a 140MPH swerve to the left.  The frame was literally torn in half about 8 inches behind the gooseneck, but there wasn't as much as a crack in any of the brazed joints.)

The production records have been lost, but our total production of frames of all types was probably fewer than 400 units, including about 105 of the CB72/77 spaceframes.  All were marked with serial numbers on
the gooseneck and had an aluminum label on the rear motor mount. Most production jigs and fixtures were scrapped when the business was closed.

I had saved, for many years, a new CB77 spaceframe, the production molds for the fuel tank and a complete but ratty 1967 CB77 which I threatened to build up into a street bike for myself.  However, the pressures of
career and a newly found devotion to boating (power, of course) prevented me from following though.  I have since turned over all of my hardware and tools to my former partner, Frank Camillieri.  Other than that erstwhile basket case, I have not owned or ridden a motorcycle in more than twenty years.

Sincere thanks go out to David Yetman for providing this amazingly detailed insight into Yetman frames !