Right from the conception of Yamaha's all conquering TZ350 and 250 the factory was already developing  a 700cc, 4 cylinder "doubled up" version of the 350cc twin.  By casting special, wider engine cases, to allow the fitment of what was, essentially ( though not exactly ), a pair of  350 top ends, they had created an in-line 4 cylinder 2 stroke production racer engine, in the bigger capacity. 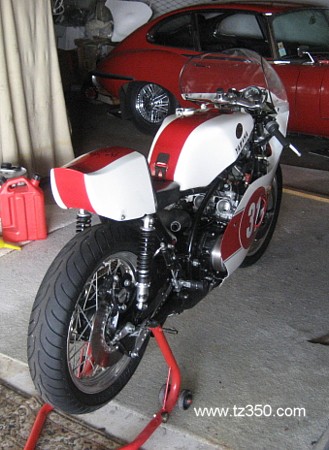 Despite releasing nine different models of factory 500cc GP race bikes for the contracted top level riders to use, it wasn't until the end of the decade that Yamaha released their production 500cc GP racer. Unlike the 750, this bike was a little more unique when compared to the smaller capacity twins.

In 1972 Suzuki stunned the world at the Daytona 200 by turning up with a brace of watercooled, 750cc triple cylinder racers producing an incredible (for the early 70's) 100bhp. Unfortunately for them, all of the bikes DNF'd due mainly to the power destroying their rear tyres.

The cards were on the table, Yamaha knew they had to do something to counter this threat and also that of Kawasaki's immensely fast, yet at times un-reliable KR750, if it was to have any chance in the new Formula 750 class. A prototype was constructed and Kel Carruthers tested it, coming away believing the approximate 90bhp it was producing was "lazy" and the bike was capable of a lot more. He was right.

Yamaha unleashed it's first production 4 cylinder 750 two stroke racer monster on the public in March 1974, in the shape of the awesome TZ750A.  Priced at around  $Aus3,500  this bike had in fact been under development as early as 1971. This ground-breaking model weighed in at 157kg dry and produced 90bhp @ 10,500rpm from it's watercooled 694cc engine. Formidable figures in the early seventies by any standard. Interestingly, Yamaha claimed the bike had the potential to produce almost 140bhp with TZ350 cylinders fitted.

Technically, though very similar to the TZ350 motor-wise, it differed in a few crucial areas, these being:

2.    The exhaust port was lowered 1.5mm and four petal reed valves added to help control the influx of fuel mixture from the 34mm Mikuni carbs and to help "tame" the power delivery of this awesome machine , along with an additional fifth transfer port, "inlet" port if you like.

3.    The 64mm dia. pistons had inlet holes cast into their rear, though a few of the early examples did not have this.

Due to the difficulty the factory had trying to fit the four huge expansion chambers underneath the bike they chose to make the belly section of each basically box shaped to utilise the limited space available. Unfortunately the shape caused the pipes to be prone to splitting open, a problem rectified by owners and tuners by simply cutting each pipe open and welding short pieces of spoke wire across in an "X" pattern as a reinforcement measure. Other problems such as cylinder head nuts splitting causing water leaks and main bearings seizing appeared at times as well.

From the "A" model the  TZ750 underwent minor improvements for the following year's "B". There were just five; an up-rated waterpump to better handle the cooling duties for the four screaming cylinders, strengthening of the split-prone chambers, a "beefed up" chain tensioner, a couple of gears were improved and most importantly, an increase in bore diameter to 66.4mm to take the formerly 694cc machine out to a full 747cc, though the first  46 "B's" were produced with the smaller capacity, only after these bikes rolled off the production line did the bigger engines appear.  (Click here for information on new TZ750 piston kits for sale) The improved chain tensioner was very welcome because one component that really copped a beating on a TZ750 was the drive chain. Savvy owners eventually worked out that the chain needed to be pre-stretched in order to last the distance in a longer event !

The "C" was unchanged from the "B" and was really just a way the factory could supply the big machines to those in need while the "D" was being developed and produced.

The OW31 works racer was released around this time. Motor-wise the bike had 6 transfer ports per cylinder, unlike the stock TZ750's. Other improvements over the customer 750's were copious amounts of titanium and magnesium to save 18kg in weight and a mono-shock frame.   (Picture: OW31 factory poster shot supplied by Tim Keyes.)

1977's TZ750 "D" was marketed by Yamaha as a "works" OW31 replica and as a result a high percentage of (though not all) owners like to claim their "D"s  are OW31's, when in fact they are little more than a mono-shock "C" with mufflers. (Still an absolutely awesome machine none-the-less.) None of the exotic metals or components from the OW31 were used on the "D", obviously to keep costs down. The only changes to the motor were alterations to the pistons, exhaust ports, jetting, crankshafts and ignition wiring. Other components to receive an upgrade were the exhausts, which now had the left hand outer pipe twisting around behind the carbs to allow the chambers underneath the motor to be the correct round section. The exhausts were also  now fitted with silencers, and the frame bracing was increased. Only about 20 or so genuine OW31's were produced that year, and just 10 more (30) TZ750 "D"s. The "D"s sold for £7,000 including a spares kit. 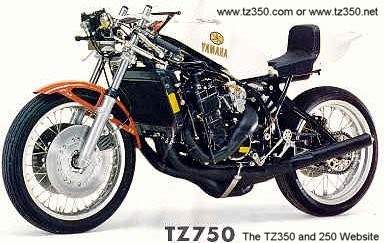 Over the next two years, 1978 and 1979, 162 more of the "OW31 replica" TZ750's were made. Unfortunately, the bikes remained basically unchanged from the "D" model, apart from 6 petal reed valves being introduced, though with an output of 120bhp @ 11,000rpm utilising a full 747cc and pushing just 152kg dry, they were not to be ignored. (  "They" say  the roofs of the transfers had their angles changed with the "F", though this is unconfirmed.)

Apart from competitively running in various Formula One classes throughout the world until 1983, and of course, today's "Forgotten Era" class racing, the "beast" has become little more than a fond memory of those who raced, worked on, and observed this incredible machine. Not forgetting of course, a truly prized possession of the lucky few who still own one.

It seems a lot of people are under a few misconceptions about the 700/750's:

c)     That they are viscous and hard to ride - Alistair Wilton, who owns a 750 C describes them as almost "diesel" to ride, though very powerful none-the-less.  You do have to be somewhat careful on the edge as his brother Kerry, who has a 750B can confirm, after crashing his bike recently.

Click here for a look at an article dissecting the TZ750 engine.

The further adventures of Byron Black... all about racing in the late 60s

....and another one about the preparation and racing of an Endurance racing TZ750  (Thanks to Scott Cejda for all articles)

Ever wondered what it's like to ride a TZ750?

Randy Norian (RG500 Resource Website) had the chance to try one out for the first time recently.

A handful of chassis manufacturers made frames for the TZ750 throughout the seventies, click here to read about TZ aftermarket frames.

Mick Stokes (MarlboroMick) has compiled a set of manuals on TZ750s that are simply amazing in their scope and information. 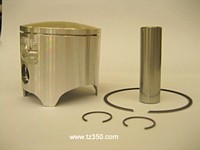 Ferry Brouwer has had a limited run of high quality TZ750 piston kits produced and is offering them for sale. 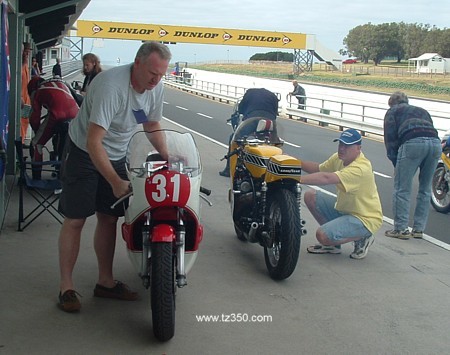 Kerry Wilton warms his TZ750B as brother Alistair looks on as he warms his own yellow TZ750C at Phillip Island. Unfortunately Alistair had severe handling problems all weekend with his 750 pattering in every corner, eventually working out that his freshly re-chromed fork tubes were too tight in their sliders, actually sticking half compressed near the bottom of their stroke! He was forced to withdraw from his last two races, the machine was impossible to ride. 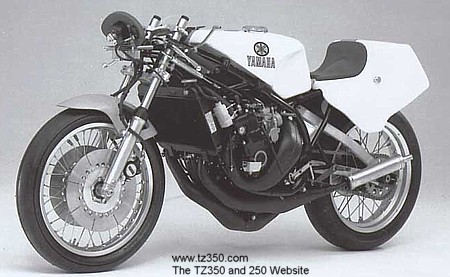 Yamaha's smaller works four cylinder 2 stroke racer, the YZR500, or OW19, first saw competition in the 1973 French Grand Prix, won by the late, great, Jarno Saarinen. The bike had originally been little more than basically a "double" TZ250, including a rather large dose of the 250's peakiness, and had been fitted with reed valve induction to tame it's power delivery by the factory after the "Flying Finn", Saarinen, had made comment on the difficulty he had controlling this type of power surge from such a potent machine. 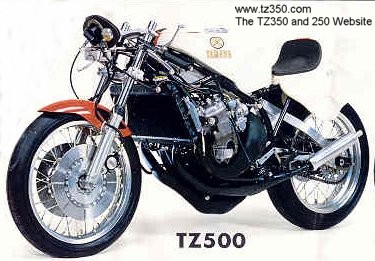 From it's initial successful debut the bike underwent regular changes with each new version, some changes were advantageous, and others not so, until the introduction of Yamaha's first production 500cc racer, the TZ500 G.

The "G" was a piston port four cylinder racer featuring mechanically operated powervalves to make it a little more "rider friendly". These operated by cable from the primary gears.

Unlike the 750, this bike shared little in common motor-wise with the smaller twins, with it's entirely new crankcases featuring alternate ( individual ) cylinder barrel bolt pattern ensuring that no-one could "try out" a pair of 250 top ends as an experiment!!  Internal gear ratios were able to be changed easily, with access to the "cassette" style gear arrangement being available behind the primary drive cover. The original spares kit had various different gears to choose from. Suspension wise, the forks came with air caps and the rear shock was adjustable for both compression and rebound damping as well as spring pre-load.

The bike came with the same fork sliders as the 750 but had different internals. The old cast iron calipers were mounted to the forks in the usual way except that the mounting lugs had the backs cut away to allow quick removal during wheel changes. The TZ500G was not a brilliant bike compared to the opposition and was renowned for gearbox seizures, a no doubt terrifying experience.

Just two more models of  TZ500's rolled off the assembly line following the "G", they were the "H" and "J".

Neither the H or J was particularly competitive at World Championship level, so the factory ceased production of customer TZ500's in 1982, but has continued it's long line of works YZR500's right up to 2001 when development for the M1 MotoGP racer took over in preparation for it's debut season in 2002. 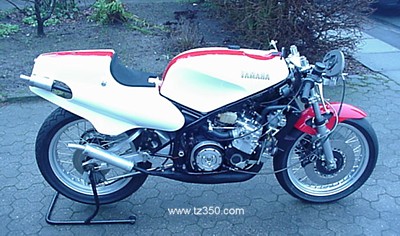 A beautifully restored TZ500J from Europe. Note the exhausts exiting through the seat unit and the reversed outer cylinders. 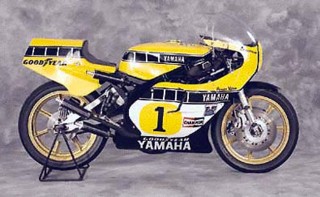 The later "R" version (reversed two outside cylinders) of this bike has been tested by Alan Cathcart. See the "Ride Stories" page.

TZ500H, from "Exciting Bike No.2", a Japanese booklet by Million Mook

( Booklet kindly donated to the website by Mitsuo in Japan.)

Sincere thanks go to Roger Gowenlock, (the late) Malcolm Wilton  and Russ Bigley for providing the above TZ500 specifications. ( TZ500 information is incredibly hard to find, just like TZ125 stuff. )  Thanks a million guys !!

If you see anything above that you know to be in-accurate, or you have something to add, by all means let us know. We're only too happy to receive advice and information on the bikes to enhance the site. Simply Email the Webmaster with any details.