At the start of 1972, Yamaha Factory mechanic Ferry Brouwer fitted a pre-production watercooled top end set-up to "Brit" Chas Mortimer's TD3. The paddock was buzzing with excitement at this revelation and by the time the GP season had kicked off, several other leading riders had appeared with the same equipment. 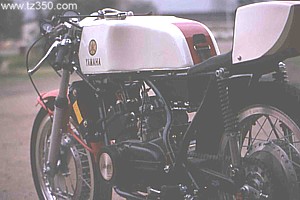 The TZ250A came out in June 1973 and, like the 350, was virtually unchanged porting wise from the previous aircooled racer apart from a slight widening of the main transfers, also, the exhausts were unchanged.

Picture: Jerry Smith's brand new TZ250A, straight after he wheeled it out of it's shipping crate in October 1973 !

Unlike the TZ350, Yamaha chose to have built-in automatically variable ignition advance in it's Hitachi TIA02-16 CDI unit. It was programmed to advance linearly from the initial mark alignment static to a maximum advance of typically 14 degrees at 3000rpm. It then returned slowly and linearly as the revs increased, reaching the original alignment set point again at 10,000 rpm. Beyond 10,000 rpm it continued to
retard at the same rate at which it approached 10,000 rpm. (i.e. 2 degrees per 1000 rpm)

Yamaha also chose to "beef up" the  main and small-end crank bearings as well as a few other minor mods  . Output was up slightly from the TD3 to 51bhp @ 10,500rpm.

"The following year's model, the "B" was virtually identical to the "A". ( '74 and '75 must have been very frustrating times for TZ customers ! )

1976 saw the appearance of the much awaited TZ250 C. The biggest news here was the new "Monoshock" chassis, with the rear shock featuring adjustable pre-load and rebound damping, as well as disc brakes front and rear. Motor-wise, the factory chose to pursue ease of riding rather than outright horsepower. Revised porting comprising wider intake and transfer ports with altered angles of entry, raised compression and a new exhaust achieved this for them to a certain degree. The exhaust was mounted on new design brackets, and the clutch basket "boss" to primary driven gear attachment was improved by changing from previous model's "dog" teeth to a  female spline, this of course required the primary driven gear to be altered to utilise a male spline. The bike sold remarkably well at just £ 1,500 including a well stocked spares kit.

The "D" model of 1977 was just about identical to the previous model except for the inclusion of revised heads with angled spark plugs and new expansion chambers with silencers as standard issue. Minor changes included the side gearbox drain bolt gasket, 2 crank web halves, base gasket and the centre crank bearing.  Carburettor mods including new floats, float chamber gaskets and choke systems also appeared. Peak power hopped up by 1 to 53bhp@ 10,500rpm.

The factory's 1978 250cc offering, the "E" was a little disappointing in that it was virtually unchanged from the previous year's offering, apart from a new chassis which had the engine sitting approx. 20mm further forward, the bike's swingarm  remained the same. The front of the engine was retained by a pair of alloy mounting plates which required an additional 20 or so bolts, nuts and washers to secure to the engine and frame. The rear lower engine mounting bolt was also lengthened by 5mm. 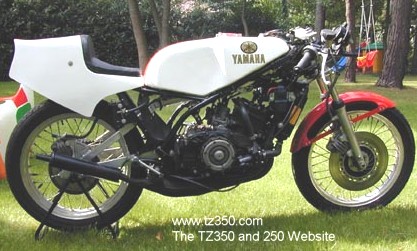 The TZ250 F heralded welcome news for Yamaha fans when it was released in 1979. A 11kg weight reduction was achieved through further changes to the frame, (despite the fact they reverted back to welded steel engine mounting brackets from the alloy ones on the "E") including a steeper rake and an alloy swingarm, as well as this the bike featured a new exhaust and mounting system, an additional o-ring (from the previous single o-ring) in the header pipe, new conrod, wider intake port and minor carburettor mods.  The primary drive gear picked up 2 teeth to match the 350's 25, the cylinder drain tube was altered. A dipstick was also introduced and the brake calipers became cast alloy units like the 750's . Power remained the same as it had since the "D" at 53bhp @ 10,500rpm.  A new fairing adorned the machine which was pointed below the header pipes and eliminated the old aluminium belly pan, a new fuel tank and seat unit appeared, and the clutch cover was reduced in size to a pressed aluminium job (the previous models utilised a cast aluminium unit completely covering the clutch) surrounding just the rear of the clutch unit.

1980's "G" model was a further departure from the "norm" of the past 3 or 4 years. New, larger diameter forks were fitted in an effort to combat the front end "patter" problem that was frustrating so many riders. Motor-wise Yamaha went all-out for peak horsepower at the expense of engine lifespan by drastically increasing the inlet timing period by removing almost 8mm from the rear of the pistons (and slightly increasing bore size) . This mod caused real problems with piston wear, despite the factory's attempt to counteract it with the inclusion of a short supporting "tongue" protruding down from the top of the inlet port in a vain attempt to reduce piston rocking. TZ250 G's were, as a result, very expensive to maintain, requiring re-builds after every race, though no-one complained about the extra 4bhp it provided over the D/E/F models ! Yamaha also increased the width of the secondary transfers slightly this year as well as fitting powerjet carburettors.

The 1981  "H" represented the factory's first departure from the popular 54mm bore x 54mm stroke (essentially) configuration of the previous 9 years along with a switch to an  individual cylinder casting configuration. In an effort to further boost horsepower, the bore was increased to 56mm and stroke reduced to 50.7mm, achieving the full 249cc in the process and mechanical exhaust power valves were fitted, as was a transmission oil pump to deliver the reduced oil capacity of the gearbox to crucial points. The "H" had a 38mm shorter motor than the "G" and 36mm ZC series Mikuni carbs replaced the usual 34mm SC's, which had been in use on the 250's since the TD3 way back in 1972. Intake port was again widened, as were the secondary transfers for the second year running.

Picture: Yamaha factory portrait of TZ250H sent in by Mitsuo in Japan.

The motor spun in reverse direction as the factory tried to further reduce the stress on the rear of the pistons. The crank was no longer a single unit, it was now a pair of cranks with a gear on the end to deliver the power to the gearbox. Despite the frame shedding 3kg, the overall weight was reduced by just 1kg. The steering rake was  altered and the swingarm  also lengthened to compensate for the shorter frame length of this model. The engine was now mounted slightly further towards the front of the bike. The new rear shock became fully adjustable for both compression and rebound damping as well as pre-load and the shock picked up a rear rubber mounting. The fork diameter went up by 1mm and brake wise the factory reverted back to the old cast iron calipers which didn't bend under pressure and also didn't fade when hot. The new ignition dropped an igniter and pulser coil, there was now just one of each and the  inner clutch hub now became a single piece unit to eliminate one reliability problem from previous years. The un-necessary neutral switch mounting disappeared 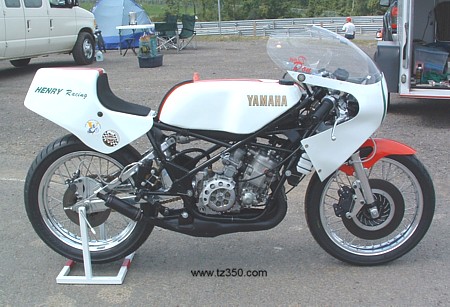 The "J" of 1982 was virtually identical to the previous model apart from a few minor "glitches" being sorted out from the "H".

It was measured and drawn up by Ed Erlenbach and is reproduced here with his permission.

A handful of chassis manufacturers made frames for the TZ250 throughout the seventies, click here to read about TZ aftermarket frames.

If you see anything above that you know to be in-accurate, or you have something to add, by all means let us know. We're only too happy to receive advice and information on the bikes to enhance the site. Simply  Email the Webmaster with the details.

Looking for pistons for your early TZ250?

Mick Stokes (MarlboroMick) has compiled a set of manuals on TZs that are simply amazing in their scope and information.

Click Here for details on how to order them direct from the factory in Japan.