The incredible TZ350, a brief history.

1973 saw the introduction of the bike which was about to transform the 350cc GP class worldwide, the incredible TZ350A. The inclusion of water-cooling in addition to other slight improvements over the bike's air cooled predecessors, the TR2, TR2B and TR3, saw Yamaha's 350cc production offering fast becoming an almost unbeatable weapon in the hands of the right rider. Internally the motor hadn't changed much from the TR3 apart from the widths and angles of the transfers being altered to improve scavenging, though actual port timing  remained as it was with the older model. Also the silicon content of the cylinder was lower compared to that of the TR3's separate hypereutectic units. The new bike produced a very respectable 60bhp @9,500rpm.

Interestingly, there was no variable advance built into the Hitachi TIA02-01 CDI controller used on the 350. Whatever ignition advance the tuner set was the advance right through the rev range. ( This was not the case with the TZ 250 ).

In 1974, the "B" model was released, with very few changes to the previous "A". As if this wasn't frustrating enough, TZ racers had to sit out 1975, waiting until the next year for a new version. The wait was worth it....

The "C" model, of 1976 was another matter entirely. Here was a radical departure chassis and running gear wise from the earlier TZ's. Adjustable "mono-shock" (spring preload and rebound damping only) rear suspension, combined with twin piston front and rear disk brakes set the world on fire, with the new bikes selling like hot-cakes from Yamaha dealers worldwide. The retail price of around £ 1,550 including a comprehensive spares kit was incredible value for money and did no harm at all to sales. The clutch basket "boss" was improved by changing it's method of attachment to a male / female spline system from the previous model's "dog" type. The exhaust header picked up an additional o-ring and a new mounting system. Power jumped up slightly to 62bhp @ 10,000rpm. 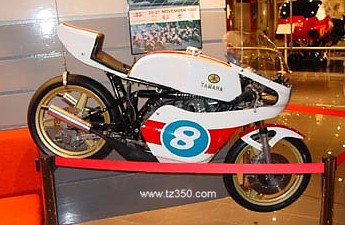 Picture: What is essentially a TZ350E on display in the Macau Museum. This bike has an F model top end, Lockheed calipers and  magnesium wheels. It also has the gear shift foot lever fitted to the right hand side of the bike indicating that possibly a British rider may have raced it at Macau. (Photo provided by the Macau Museum.)

The "D" and "E" models of the next two years were a little disappointing from the "punter's" point of view due to the fact that very little was altered at the factory from the "C".

Minor porting, piston and exhaust upgrades saw the peak horsepower output up by 2 to reach a claimed 64bhp @10,500rpm. The factory also chose to fit an offset, angled plug head with the "D", in an effort to combat cylinder and piston distortion as well as slightly raising the compression ratio. New expansion chambers were now fitted from the factory with removable silencers. Small changes were also made to items like the base gasket, crank webs, small end bearings, the gasket for the side oil draining bolt on the gearbox, carby floats and choke systems etc.  Tyre widths were also increased from the factory though rim sizes remained as per the previous model.

Not to say that the TZ350 became uncompetitive with the introduction of the "D", quite the contrary, with customer bikes winning 350cc races and domestic championships across the non-USA world from 1977 through 1978. (America didn't run a 350cc class but allowed 350cc bikes to run in other larger capacity classes.)

The "E" had  a new frame which  some say re-positioned the engine slightly more forward featuring detachable alloy engine plates and around 20 other additional bolts, nuts, washers etc. as well. The swing-arm length remained as for the "D" as did just about everything else apart from the rear lower engine mounting bolt which was lengthened by 5mm. .

(Picture courtesy of Mitsuo in Japan.)

The introduction of the "F" model in 1979 saw, finally, effective and much anticipated improvements to the now 3 year old TZ 350 C/D/E. Much to the relief of Yamaha devotees, the factory made several changes to the bike, some advantageous, in time owners learnt others were not. They included:

a)    The provision of a new "6 port" cylinder, with subsequent improvement in rideability, with an improvement in peak power output to boot. Also new "cross-over" style chambers to keep the muffler tips within FIM requirements length wise and a new piston. The "F" pistons were the first of the short pin "slipper" type but the side windows didn’t have the support web running down the middle, and the ring sometimes pulled the edge of the piston down into the window.

b)    A new conrod, which was lighter, but turned out to be prone to failure ( due mainly legend has it, to the wrong silicon content in the pistons causing them to wear and deposit aluminium on the small end bearings causing them to fail and take the conrod with them ), plus a new "3G3" piston to suit the new cylinder.

c)    The inclusion of 38mm "Powerjet" Mikuni carburettors to further enhance the new engine's  usability through the ability to fine-tune the midrange mixture more effectively and also reduce the risk of seizure at high rpm, while actually contributing to the increase in peak output at the same time.

d)    A new, revised, lighter weight frame, which had a bad tendency to fail around the headstock, which is why so many of them were re-inforced in this area, or had aftermarket frames replacing the Yamaha items. (Click here to read about aftermarket TZ frames.)

f)     New forks featuring 3-way adjustable spring preload via. an external adjuster on top of each fork tube, as well as revised fork internals designed to reduce the front end "patter" being experienced by a number of 350 riders.

g)    A new fairing which dispensed with the separate belly pan and was a sharper shape at the bottom-front (behind the front wheel). The fuel tank was now a tapered shape to match the sloping upper frame rails and the seat unit was changed to a more "current" shape.

Frame failures around the headstock area were a common problem with the "F" model 350's, for this reason a large number of owners chose to ditch the stock frames and replace them with units made by such manufacturers as Nikko Bakker, Bimota, Spondon, Maxton, etc. Others chose to reinforce the stocker with additional bracing such as that shown in the photo.

1980's TZ350 G was virtually the same as the previous "F" apart from another attempt at improving the conrod, reverting back to the older "E" inner main bearing circlip/washers, a revised piston silicon content as well as strengthening in the sides of the piston, and a different "dipstick". Another change was  the way the ignition rotor was bolted on to the crankshaft. The timing side crank wheel had an external thread and nut, where the earlier models had the standard 7mm internal thread.

Picture:  A fine example of a TZ350G from Joris van de Wiele.

The 350 "G" was never really improved on, despite Yamaha releasing another model, the "H", which was really just a case of the factory using up a lot of it's stock of  parts, giving up further production of the mighty TZ350 once the FIM dropped the 350cc World Championship class in 1982.

If you see anything above that you know to be in-accurate, or you have something to add, by all means let us know. We're only too happy to receive advice and information on the bikes to enhance the site. Simply Email the Webmaster with the details.

Click on this link to read an article written in the late 80's about buying and running a 2nd hand TZ350.

A number of chassis manufacturers made frames for the TZ350 throughout the seventies, click here to read about TZ aftermarket frames.

Click on these thumbnails to read an article written in 1973 on the newly released TZ350:

Please note: The article is taken from the now defunct "Cycle" magazine. We have no idea who the author was or who actually owns copyright to it and had to buy the article from an American company that deals in old brochures and articles.

This one is of an earlier, 4 port cylinder, once again courtesy of Ed..

Looking for pistons for your TZ350?

Mick Stokes (MarlboroMick) has compiled a set of manuals on TZs that are simply amazing in their scope and information.