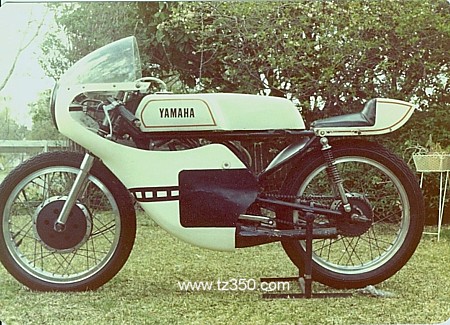 Picture: Stew Ross' AS1 based racer. The engine was prepared by legendary Aussie tuner Bert Flood.

Early in 1969 Yamaha acknowledging the popularity of the 125cc GP class of roadracing, released a limited number of GYT “hot up kits” to suit their  AS-1 roadbike.

An interesting side note… Yamaha also released a GYT hot-up kit for their 100cc YL-1 twin cylinder roadbike  in 1969.

Next from Japan came a similar kit for the new AS-3 roadbike including, once again barrels, heads, pistons (shorter to suit standard deck height), rings, exhausts, racing magneto ignition, carburettors, con-rods, big end bearings, clutch plates, gear change lever, clip-on bars and a racing twistgrip. This time around it also included gear components to bring the bike up to a seven speed. Nothing except con-rods, rings and gears were interchangeable with the AS-1 kit to fit an AS-3 or vice-versa.

Yamaha released it's first production 125cc roadracer, the TA 125, in early 1974 and advertised it as a "Clubman level Production Racer". 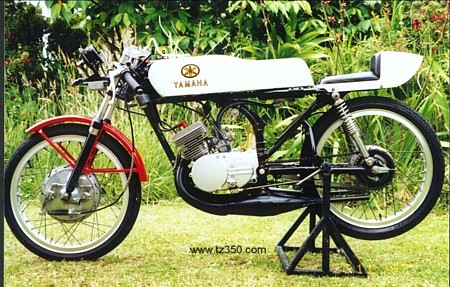 (Photo provided by a contributor who would prefer to remain anonymous.)

The TA 125 was a twin cylinder, air cooled, two stroke, twin shocked racer based on the company's successful AS-3 roadbike, released in early 1974. In fact parts such as the swingarm, rear wheel etc. were identical to the AS-3, though the CS2 forks, DS6 front brake, DS6 front wheel, fuel tank and obviously fairing and clip-on handlebars were changed from the roadbike.

The frame was quite similar to an AS-3 unit, though produced as a racing special, featuring different looking top rails and other modifications such as removal of un-necessary lugs and strengthening the unit to handle the rigours of a racing environment.

Motor-wise, Yamaha chose to keep the basic form of the AS-3 cylinders and heads. The only modifications were altering the porting and chrome lining the bores, changing the exhaust securing system to springs from bolts, and also changing the compression ratio. This combined with new exhausts, pistons, 28mm carbs, close ratio gearbox and a Hitachi CDI ignition system ( visually identical to the TZ units ) boosted the output to a competitive 24bhp at 12,500rpm.  Heavier clutch plates, strengthened crankcases around the main bearing journals, and the primary gear being secured to the crankshaft by key/keyway and nut rounded off the modifications to the motor. The TA125 was a 5 speed though there were a few factory 6 speeds around. There were  7  gear kits available,  for road use. 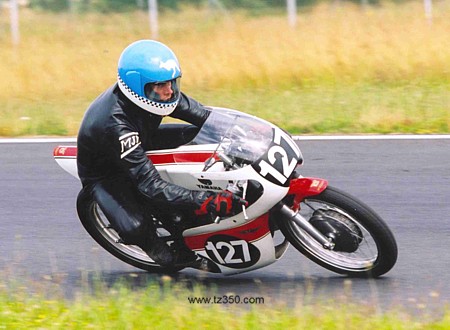 Picture: Eric Boland "doing the business" at Hervé-Lurcy aboard his TA125 in 2004.

Production of the TA 125 ceased in Nov.1974, marking the end of Yamaha's air cooled 2 stroke production roadracers and the beginning of a five year wait for another 125 roadracer, the TZ 125G.

The first water cooled two stroke 125cc roadracer from Yamaha was released late in 1979 in the shape of the TZ 125G. 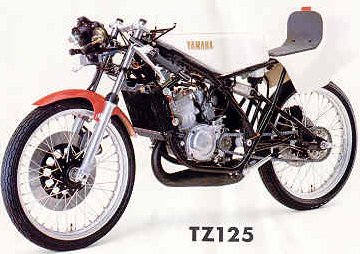 This single cylinder racer shared little with it's big brothers apart from items such as brake discs, instruments, controls and graphics.

1980's "G" model produced 30bhp @12,000rpm meaning that attention to crank maintenance was of the utmost importance. The bike weighed in at just 72kg dry. It ran a Hitachi CDI which was actually identical to that fitted to the YZ 125 G motocrosser. 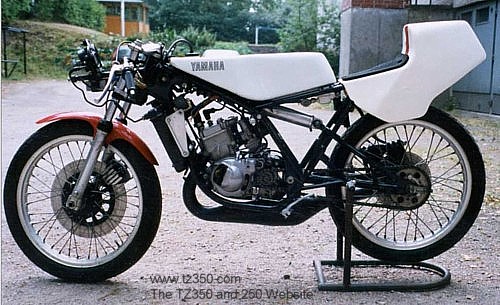 Picture: Jouko Pajunen's TZ125 G. the bike is currently in pieces being re-built ready for next season.

The next year's "H" model gained a single horsepower unit to take it to 31bhp. It sported a new seat unit.

Thanks go to Jouko Pajunen in Finland for providing information to help fill the above Specs table.

Thanks also go out to Peter Shires from Australia for additional TA125 info, helping to fill the gaps in that column.

Mick Stokes (MarlboroMick) has compiled a set of manuals on TZs including the 125s that are simply amazing in their scope and information.

Special bulletin from Yamaha in 1974 regarding shimming of the TA125 crank.