Welcome to the internet home of the 1962 to 1982 Yamaha 2 stroke production roadracer!

Yamaha's OEM Hitachi CDI units fitted to early TZs were great performing, reliable components that gave years of loyal service to countless TZ owners around the world. Unfortunately, like anything, they don't last forever and, today, can be a source of much frustration when trying to diagnose ignition issues.

Enter Rex's Speed Shop. Marcus Rex and his team listened to the cries of frustration from TZ owners like us and have come to the rescue with a remarkable piece of equipment. Rex's Speed Shop's replacement CDI units are second to none, offering a top end solution to those seeking an edge in performance and reliability in the cut-throat world of Post Classic racing for a very reasonable and competitive price. 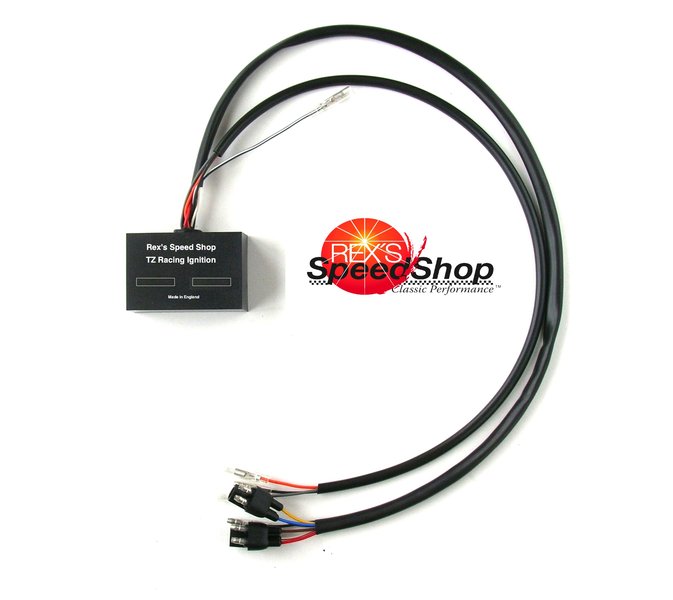 Rex's Speed Shop manufacture their ignition units using modern components and up to date designs in order to give excellent starting and performance. They are British made and designed to be 'plug and play' with no set up required.

I recently tried one of Rex's Speed Shop's TZ350 CDI units on my own F model and I'm (very!) happy to report that it performed flawlessly. The bike hadn't been run in months and fired up almost immediately, much to my delight! A test run up and down my local test track (my street) revealed a lovely even spread of power with plenty up top.

The finish on these units is simply outstanding and fitting to my own bike involved nothing nore than a few strategically placed cable ties to secure it to the bike's OEM CDI mount. (Marcus and the guys have recently released a mounting bracket designed specifically for their CDIs.)

Horsepower/torque figures? Well without a dyno I can't be sure, but "seat of the pants" told me that the ignition curve felt the same as an OEM Hitachi ignition.

Weight-wise, the unit is almost 100 grams lighter than an OEM Hitachi CDI.

On top of the wide range of ignition components Rex's Speed Shop have catalogued, they also offer a fixed price CDI refurbishment service for most TZ CDI units and stators. For example, a metal cased 125/250/350 CDI is £150 with all new electronics and leads. The team will strip out your old CDI, freshen up the metal case with a special silver coating, replace it's internals with brand new components, wires and plugs, then re-seal it with resin as per OEM. After this each unit is tested and calibrated to bring it back to original specs. The fixed price includes 20% VAT, something we who live outside the European Union don't have to worry about! On that subject, Marcus says that they have a large international customer base, sending ignition components all over the world, so international purchases/refurbishments are definitely not a problem.

All new CDIs and existing CDI refurbishments come with a 2 year warranty reflecting the confidence Marcus and the guys at Rex's Speed Shop have in their products.

Also on offer is a coil re-winding service. Contact Marcus for details.