LC and Other 2 stroke Roadracer Corner. 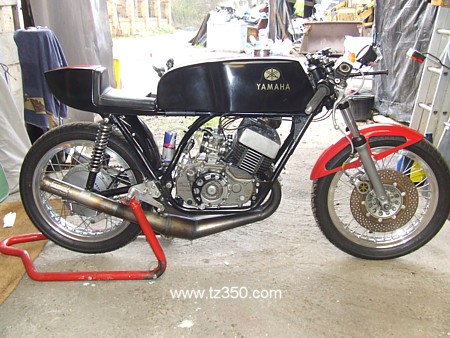 This section of the TZ350 and 250 Website has been set up to cater for all the other types of older 2 stroke race bikes such as the Yamaha RD 250 and 350 LC series and other makes and models as well.   It will not cater for road going bikes, the entire site is designed to assist 2 stroke racers.

Check out our "Setting up an LC racer" section

A short, personal story about getting into racing LC's:

Late in 1995 I was working in the country and the backhoe I had doing a job for me dug up a telephone line. I looked up the hill and there was a single farmhouse connected to this cable, so out of courtesy, I drove up and informed the residents that I had broken their telephone line and was straight onto "Telstra" to have it repaired.

As I turned away from their front door I noticed an old, shitty looking 350LC leaning against the fence and asked the farmer who's it was and did he want to sell it?

He replied: "Just take it mate, it's your's, I don't think it goes any more." 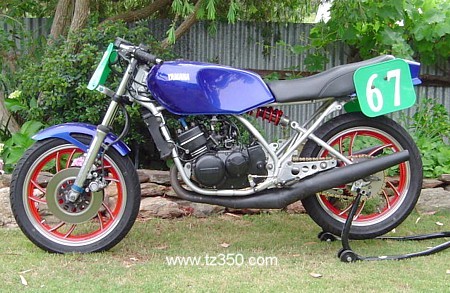 I certainly didn't doubt what he was saying, looking at it. It had been sitting in the weather for months, maybe even years, with grass growing around it and all. I thanked him and loaded it onto my "ute", fully expecting to be taking it to the "tip" the next weekend. When I got it home I put a bit of lawnmower fuel in it and gave it a half hearted kick. The bloody thing fired!! A couple more kicks and it was running !! I couldn't believe it.

So began my "Forgotten Era" racing. I went to a meeting at Amaroo Park as a spectator and picked up a few "tips" from some of the guys there,( Mark Boddy and Lech Budniak included,)  applying them and a few ideas of my own to build my "racer".

My first meeting was at "Oran Park", on the shortened "South Circuit", with my little LC set up as a 350. I think I finished third behind two of the fastest TZ350 riders in the State that day in every heat. Rob Hinton and Damon Owen stayed about 100 -150 metres ahead of me right throughout every race, they didn't even realise I was there, stalking them on the mighty $400 Aus  LC !! ( Mind you, this is before I became a father and slowed down. I was in Kamakaze mode here ! ) My bike  just didn't have the "mumbo" to catch them on their TZ's. All the other LC's finished 150 metres or more behind, I was blown away, as were a lot of people at the track that day, this LC really went hard!! ( It certainly wasn't riding prowess that did it, since I had 0 roadracing experience prior to this day )..... I was hooked !!

I went home and set about rectifying a few things that needed changing such as ride position, foot lever positions, and, most importantly, power.

A few months later I acquired a set of race chambers (see below) from a guy I had working for me on a different job driving a water truck. We just happened to be talking about bikes and LC's and I mentioned that I needed to find a set of race chambers for my LC. He replied that he had a pair hanging on his garage wall and I could have them if I wanted (I'd only known the guy for a few hours, I guess he wanted more work !! ) . I naturally told him yes, I would love to get hold of them, trying to contain my excitement !!  I also bought a dilapidated TY 175 A trials bike off him ( had to pay for that one !!).

Over the next year or so I kept racing and modifying my bike until it reached the state it was in when I sold it. The thing had won or at least placed in the top three every time I ran it. It only "owed me" around $800 Aus in total, but the amount of time I had spent developing it was worth 10 times that figure.

Picture: David Fevrier on one of his LCs in France.

I wanted to get hold of a pair of 34mm Mikuni powerjet carbs to try, so I once again placed a "wanted" ad in a magazine. A guy answered the ad and told me on the phone he also had a TZ350 and parts for sale. I told him, no, I don't want a TZ, just the carbs and rode down on my ZX9R for a look.

When I saw the TZ he had for sale and the mountain of spare parts that came with it, all for $3,000 Aus, I couldn't pass it up. It was just too cheap. This was the beginning of the end for my LC racing, I fell in love with TZ's. Sure, they vibrate to pieces (literally), wear out, break things, blow up etc., but when they are under you, doing almost 11,000 rpm flat out in top gear, the world just stops. It's something else.

Fast forward to 2002, my mate "Titch" has decided to permanently "hang up his boots" and sell everything he has to do with motorcycles....... After much talking to him to try and convince him that he will miss racing and how much fun it is, he asked  me did I know anyone who wants to buy his bike, spare parts and riding gear. I looked over his LC and could see it had been sitting for a while and needed work, which is just the sort of thing I enjoy doing so I made him an offer and bought the lot.

I had intentions of getting the LC out on the track myself and set about going right over it to prepare it for racing once again. Unfortunately when I was finished I found myself strapped for cash, ( aaaah, the story of my life !! ) so I was forced to sell it. The bike was bought by a guy who to date has had a ball on it and found it very reliable, as all good racebikes should be.

I miss owning an LC, they are fantastic little machines. Titch's green machine was the 6th one I've owned, I'd say there will be a few more in my lifetime, I love them.

LC's are direct cousins to the TZ's and a lot of parts interchange between the two with little trouble, though   road-going LC owners should be discouraged from  fitting  TZ parts for the following reasons:

Below are some shots of LC and other types of 2 stroke racers  here in Australia and other countries. 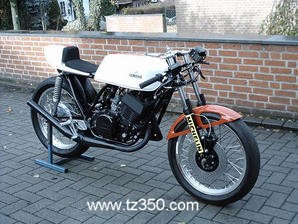 An RD set up as a sort of TZ replica. Much can be done with the RD and LC range of bikes.

Do you want to experience fame beyond your wildest dreams? ( ha!! ) Then Email the Webmaster with your LC and other 2 stroke racebike shots and we just might post them for you.... as long as they are RACEBIKE looking.

Note: As soon as your bike starts looking like a roadbike it's outta here !!  There are plenty of good  RD and LC roadbike sites on the 'net  to post shots of your roadbike on.

Aermacchi/ Harley Davidson 2 stroke 250cc racer ( Marcus de Caux ). These bikes are surprisingly easy to obtain parts for. All the bearings are standard, "off the shelf" items and they run TZ pistons etc.

Modifications done to a very successful RD250 LC racer: ( The ones we can remember anyway !)

With all the abovementioned modifications this  LC racer was one of the fastest in the country. It actually passed a few of the older TZ 250's down the straight and I think it holeshot every race it was ever run in. The owner was accused of running oversize bores (2mm plus) by more than one rival because of the way this thing pulled away from them coming out of corners. It always remained on it's original, 54mm bore.

Above all, this bike was ultra reliable, it never let us down. If we'd tried  to turn it into a TZ hybrid it would have been like a hand grenade, waiting to explode.     LC's are fast.     LC's are reliable.

To see a dyno run result for this bike compared to a stock RD250 LC   click on this link and scroll down the "Setting up an LC racer" page.